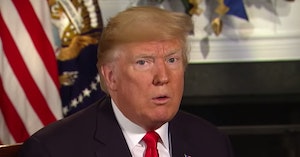 A lot has been written about Donald Trump’s habit of sexually assaulting women, which he basically confessed to in a tape recorded by Access Hollywood and heard by all. Is he still the president? Yes. It’s a dark timeline. Somehow, there is still more to say and more assaults to uncover.

A new book by journalists Barry Levine and Monique El-Faizy draw on over 100 interviews to try and begin to address everything Trump has done and been accused of doing.

The book also “reveals another 43 allegations of alleged inappropriate behavior, including 26 instances of unwanted sexual contact.”

“When he says that thing, ‘Grab them in the pussy,’ that hits me hard because when he grabbed me and pulled me into the tapestry, that’s where he grabbed me."https://t.co/PfGei507mN

Many of the interviews in All the President’s Women: Donald Trump and the Making of a Predator are exclusive to the book. An excerpt published in Esquire includes an interview with a woman named Karen Johnson, who says she was assaulted at Mar-a-Lago during a New Year’s Eve party in the early 2000s.

Johnson was at the party with her husband who had multiple sclerosis. They decided to leave early, and Johnson, who was in her thirties at the time, made her way to the restroom one last time before they left.

“I hadn’t seen [Trump] that whole entire night,” she says. “I was just walking to the bathroom. I was grabbed and pulled behind a tapestry, and it was him. And I’m a tall girl and I had six-inch heels on, and I still remember looking up at him. And he’s strong, and he just kissed me. I was so scared because of who he was… I don’t even know where it came from. I didn’t have a say in the matter.”

Melania was apparently also at the party and had gone upstairs.

After Trump was done assaulting her, Johnson says he told her they had to see some guests out together.

“So I stood next to him while he greeted some guests out the door,” Johnson says, adding she didn’t want to say anything at the time because she was afraid it would be awkward. “I was afraid to say what had happened. I didn’t even know how it happened.”

Many years later, Johnson says that the whole “grab them by the p*ssy thing” really brought back some awful memories.

She was also reluctant to come forward because she knew her reputation would be torn to tatters before Trump got into trouble. Sadly, she has been proven right. He’s the president.

“I feared that because I had been a dancer many years before they would say to me, ‘Well, you must have asked for it.‘ What he did was very traumatizing to me,” Johnson adds. “And it still is. You know, I didn’t ask for that. I was literally just walking through a room… no matter what my past is I don’t deserve to be treated that way.”

No one does. If people were treated in the way they deserved for their past, Trump would be in jail right now.