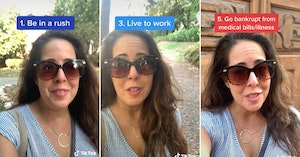 A popular TikTok video by a woman who moved from the U.S. to Italy gained interest after she listed the five things she never wants to have to do again after living in the European country for a while, showing a stark contrast between the two nations.

User “Roze” has dedicated most of her TikTok account to sharing what it’s like to live in Italy compared to America, and though there are some things about the U.S. that she misses, people are particularly intrigued by the things she doesn’t miss at all.

This video gained over 1.2 million views since August and is still making the rounds across the internet, leaving many Americans wishing that they could try living elsewhere, or better yet make the U.S. a better place to reside.

The first item is simple. Roze feels that living in Italy means that she’ll never again be in a rush — something that seems unimaginable to many living across the Atlantic.

“One of the first things that attracted me to Italian culture is the fact that people don’t seem to be in a rush,” she says. “There are no drive-thrus. People don’t walk and eat. If you need a coffee, you sit down and drink a cup of coffee. There’s always time for that.”

On a related note, the second thing Roze won’t do again is own a car. Like many European nations, Italy has many cities that were built to be fully walkable. This means that essential businesses like pharmacies and grocery stores, as well as places like coffee shops, bars, entertainment venues, and parks, are all within walking distance of people’s homes by design.

Roze says she’ll rent a car if she really needs one, but is happy to be without the costs — both monetary and environmental — of owning one.

“I don’t plan on ever living in a place where you need a car to get around,” she declares.

The third item she doesn’t miss is what she calls “living to work.” Again, Italy follows most of Europe in that its culture doesn’t revolve around people’s jobs, but rather the full spectrum of human lives. Italians don’t immediately introduce themselves with their professions and value rest and vacation time rather than making themselves sick with overwork.

That point is underscored by the next thing on her list, which is trusting the internet to tell you when a business is open. Unlike the U.S., where something drastic has to happen for a business to be unexpectedly closed, Roze says that Italian shops will often close early if no one’s coming in or be closed for nearly an entire month at a time so the owners and workers can rest. Some places close for three hours in the middle of the day just for lunch.

The final list item is one that very often comes up with people comparing European countries, or nearly any other country in the world, to the U.S. — healthcare. Italy has universal healthcare, meaning that if she can stay there, Roze will hopefully never have to “worry about going bankrupt for medical bills.”

The number of questions about moving to Italy in the comments suggests that Roze is definitely making the idea sound appealing to a lot of Americans, although unfortunately immigrating there is quite difficult. Others who have managed it confirmed her assessment that living in the European nation has been better for their health and happiness overall.

“I’m almost crying with relief for you!” one user said. “The American life is stressful! Do you need a visa or citizenship to move there?”

“After living abroad recently everything she is saying is 100% truth!” wrote another. “The European way is the best way to live.”