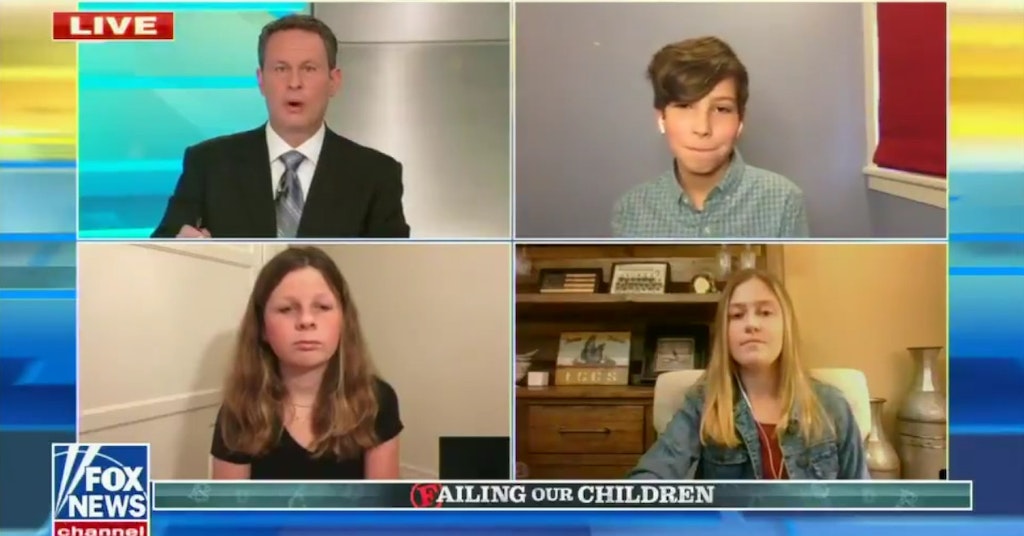 Fox and Friends host Brian Kilmeade held a segment this morning that included three young schoolchildren talking about the reopening of schools across the U.S. and got a little surprise from a 6th-grade boy who suggested that Biden was doing a better job than Trump would have. In a clip now spreading across Twitter, Kilmeade asked Philadelphia native Mason Seder what he missed most about in-person school.

After mentioning his friends and after-school activities, Seder had another opinion to share with Kilmeade.

“I think that we’re very, very close to getting back to school,” he said as another one of the kids nodded. “And I think that the way our new president is handling things is a very good way, and we would not have gotten to this if it were still the last president.”

Even when talking with a 12-year-old child, Kilmeade could not pause from kissing up to Trump and took a moment to argue with the kid before moving on.

“Really?” He asked. “That’s hard to believe because the last president was saying ‘I want every kid back in school.'”

The barely-contained grin on Seder’s face at this is our personal favorite part of the video.

Donald Trump did indeed say things like “I want every kid back in school” when he was president, though he was the one in office when schools shut down across the U.S. in the first place, and he was saying he wanted kids back in schools at the height of the pandemic when thousands of people were dying daily. Biden also always maintained the position that he wanted kids to return to in-person learning eventually but wanted to ensure it was reasonably safe for them to do so.

Regardless, Mason Seder is now every Trump critic’s favorite kid as they praise him for speaking his mind on an extremely Biden-hostile program and make fun of Kilmeade for arguing with children because they aren’t Trump sycophants.