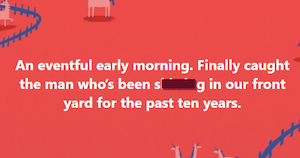 After pooping on his neighbor’s lawn multiple times, a 70-year-old Trump supporter was arrested in Ohio.

The culprit is Jerry Detrick, and he has been defecating on neighbor Matthew Guyette’s yard for some time.

Simply because Guyette supported Joe Biden in the 2020 presidential election.

Guyette had missed the previous late-night drops from Detrick, but May 30 at 3 a.m. was the magic hour for Guyette. That’s when he spotted Detrick in the act and called 911.

According to the police report, “Sgt. Marion also advised he did witness a wet spot in the location where the subject was seen squatting,” which is a great line to include in any official document.

Guyette was advised of his rights as a victim and completed a victim’s rights form. Then, he went to Facebook to post what may be the greatest Facebook update of all time,

“An eventful early morning. Finally caught the man who’s been sh*tting in our front yard for the past 10 years.”

Regardless of how long the saga played out, the tale of the pooping Trump supporter gave the internet a good giggle.

In the comments, someone asked if the reason was bias-motivated, and Guyette confirmed it was. And that the house he shares with his husband wasn’t the only target on this man’s poop crusade.

“He told the police it was because we supported Biden and he’s for Trump. But I think he did it to other people and at our local museum as well. Plus it started in the Obama years. Could be political. Could be because of who Eddie and I are and what we represent to some people. All I know is what he told the police. He may have assumed they too were trump supporters (80% of this county voted for him) and he may have been trying to talk his way out of the predicament.”