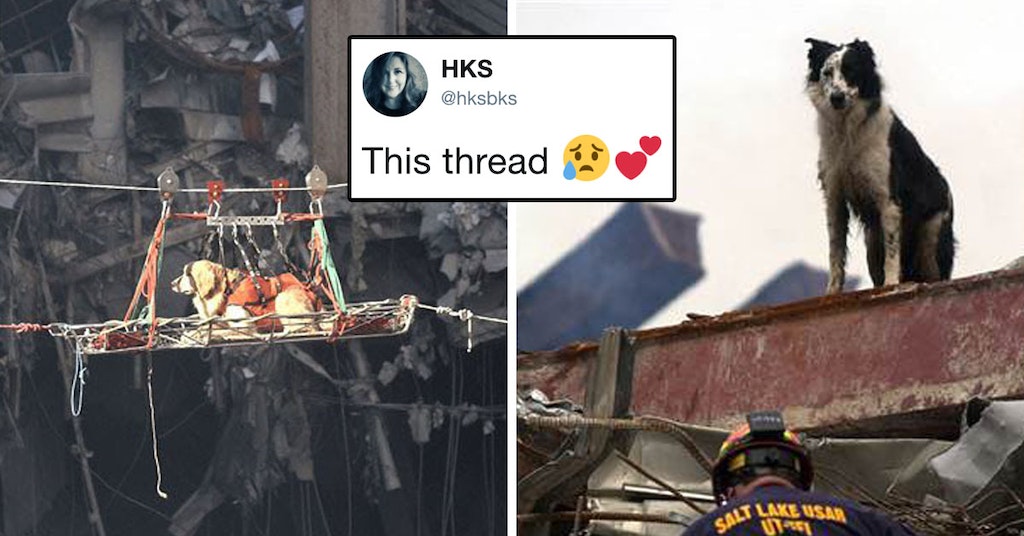 Yesterday was, of course, the 18th anniversary of the 9/11 terrorist attacks that toppled the World Trade Center, resulting in some 3,000 deaths, and affecting the world in profound ways for years to come.

People from New York and around the world posted tributes and remembered 9/11 in various ways, remembering those who were lost or how they were affected by the attacks and their personal and political aftermath.

One Twitter account, @ClaysandBirds, decided to reflect on 9/11 a bit differently by honoring the 9/11 dogs who were present on that fateful day in 2001.

While rarely discussed a number of search and rescue (SAR) dogs took part in the rescue and recovery efforts at Ground Zero, and the Twitter thread remembered their contributions and the effects they in some cases suffered.

Every year as we move away from the events of 9/11, I find the images of the towers falling don’t impact the way they use to. I now try to focus on individual stories from that day to help remind me of the emotions I felt. This year I want to focus on the dogs of 9/11 pic.twitter.com/8vFeAcntcp

The dogs immediately faced a situation on a scale that only some had been trained for.

Roughly 300 Search and Rescue dogs were deployed to ground zero. Only 100 were equipped to handle what they encountered. Most SAR dogs weren’t trained to handle large scale operations or urban environments. 9/11 rewrote the training guide for SAR dogs

Some of the search and rescue dogs who served on 9/11 went on to help in other national crises like Hurricane Katrina.

The most famous dog from that day was Bretagne. She was the last known SAR dog that was at ground zero. She also worked rescue missions at Katrina and Ivan. One of her greatest contributions was acting as a spokesperson for the dogs of 9/11. She died on June 7, 2016 pic.twitter.com/xNBH1fq555

The thread remembered the 9/11 dogs for their tireless and heroic efforts that day and in the days and weeks that followed.

Riley is the subject of the most famous K9 photo from 9/11. Riley was trained to find living people and was not trained to be a cadaver dog. Despite this he continued to work tirelessly. Riley passed away on 2/26/10 pic.twitter.com/zLQC60PP57

The thread shared many personal anecdotes about the 9/11 dogs, from their names and places of origin, to remembering when they died.

Appollo was the first dog at ground zero. He arrived on the seen 15 minutes after the attack. He nearly died from falling flames and only survived because he previously fell in water and was still wet. He died in November of 2006 pic.twitter.com/25RQ2lKqH4

Some of the 9/11 SAR dogs came with their handlers to help from other states and even other countries.

Trakr was driven down from Nova Scotia by his handler. He found the last known survivor from ground zero, Genelle Guzman. When his handler, Symington, was seen on TV by his department in Canada, he was suspended for leaving without permission. Trakr died in April of 09 pic.twitter.com/Dsf2H9H953

Not all of them survived.

Sirius is the only known K9 death. He was an explosive detection K9. He was in the S tower when the N tower was hit. His handlers last words to him were, “I think we’re in a lot of trouble. I will be back for you.” His handler locked him in his kennel before helping victims. pic.twitter.com/9JeuAh8xy2

Officer Lim with Sirius. After putting his dog in his kennel, Lim went to the first tower hit. He was stuck in a collapsed room for 5 hours in the north tower. During that time the south tower fell with Sirius was in it. I just wanted to clarify that he didn’t abandon him pic.twitter.com/Xx2ii3gT1Z

For some of the animals, the extreme stress of the situation was too much.

Worf found the remains of two firefighters on his first day. He was immediately retired because he emotionally shutdown and quit eating. “He kind of withdrew from everything. There was so much death there, it was emotional for the dogs.” – Mike Owens his handler pic.twitter.com/xqQvQyrDK3

Ricky was the smallest SAR dog at ground zero. This was crucial for search operations as he could reach spots other dogs couldn’t. He would frequently go places his handler couldn’t see. He worked 10 days straight on the night shift. pic.twitter.com/vCu4Dul2Sl

The 9/11 dogs worked through injuries and often without rest.

Kaiser was deployed to ground zero. He worked 12 hour shifts for 10 days straight. “He injured his foot during the rescue effort. the veterinarian stitched him back up. His cries showed just how painful it was, but for the record, Kaiser was back on the job the very next day.” pic.twitter.com/3Pc5ChFDSw

I’m not sure if this photo is Jake (it looks like him), but Jake was a rescue dog found abandoned in the streets. His handler trained him and he served with Utah Task Force 1 at ground zero. pic.twitter.com/T2Wy1mM0bq

There were photos of the search and rescue dogs and their handlers side-by-side.

Here is jake with his handler Mary Flood. He also served at Katrina pic.twitter.com/LuotJTxunl

Some 9/11 dogs were employed at the locations of other attacks.

Sage was deployed to the pentagon. It was her first mission. She found the body of the terrorist who flew flight 77 into the Pentagon pic.twitter.com/iiJYZFNpzE

Coby and Guinness worked for 11 days on 12 hour shifts at ground zero. They found the remains of multiple people pic.twitter.com/QJ3sYQ9akl

As therapy dogs, some were there to ease the stress and emotional burden placed on first responders, survivors and others directly affected.

Joey was a therapy dog who made numerous trips to ground zero. He was a former race dog. pic.twitter.com/BCQpGkwRtd

Tikva was a therapy dog at ground zero pic.twitter.com/ntELHAM34y

The 9/11 dogs’ contributions are commemorated by a statue at the 9/11 Memorial in West Orange, New Jersey that looks out across the water towards New York City.

There is a SAR memorial statue at The West Orange 9/11 Memorial in NJ. The statue features a golden retriever looking across the river pic.twitter.com/b3pdcp01C5

People were moved by the touching tribute to the sacrifices the animals made.

The love and courage from a dog will never be outmatched https://t.co/BCJCyvtQsH

I just tear up thinking about all those brave boys and girls, the furry ones, who just went into battle without even understanding the danger and they went there over and over again. Because they love us that’s why.