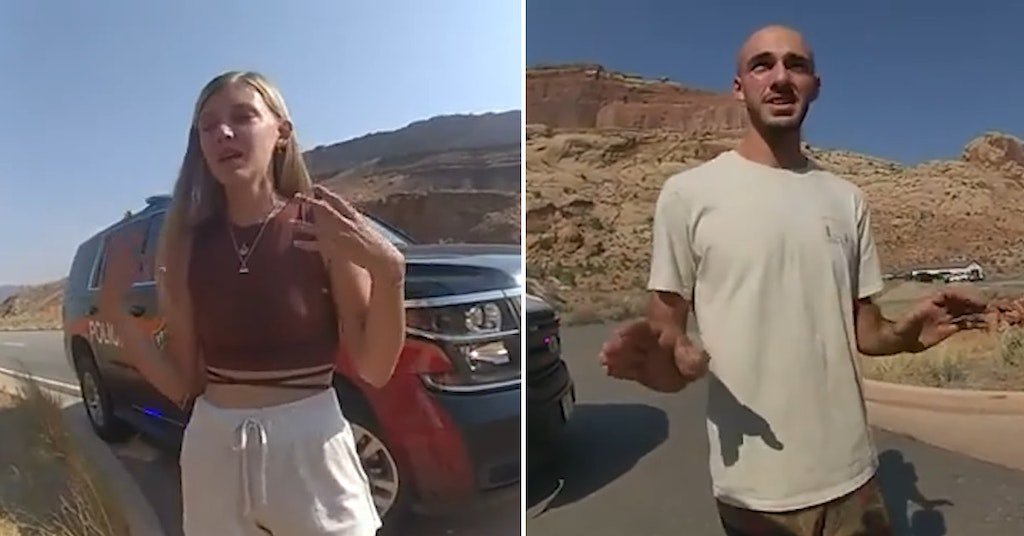 A 911 call reportedly obtained by Fox News could provide deeper insights into what led to Gabby Petito’s disappearance and presumed death, with the caller stating that they witnessed Brian Laundrie slapping and/or generally hitting Petito during a fight that occurred in mid-August. The call was directly related to an incident that the Moab police in Utah had responded to on August 12 between Laundrie and Petito in which another witness described the latter hitting her fiancé on the arm as she attempted to crawl through their van window to get inside.

However, the recorded 911 caller says that they saw Laundrie hitting Petito multiple times during the altercation, which prompted the witness to make the call.

“We drove by and the gentleman was slapping the girl,” the caller says.

“He was slapping her?” the dispatcher asks.

“Yes and then we stopped. They ran up and down the sidewalk. He proceeded to hit her, hopped in the car and they drove off.”

According to the police, Petito admitted to hitting Laundrie when they were questioned, nearly resulting in her being arrested on a domestic violence charge. Moab Police Department body camera footage shows Petito in clear distress but saying that she did not intend to hurt her fiancé, which apparently led to the decision to let both of them go without charges.

“I’ve decided I’m not going to cite you for domestic violence/battery,” an officer says in the footage. “It was only going to be a Class B misdemeanor. However, the domestic-violence portion of it makes life a major pain in the butt, especially when you’re 22.”

Arresting the individual determined to be the primary aggressor in a case of domestic violence is often a routine requirement for police in order to at least separate the couple before something worse can happen, but officers very often lack the training necessary to make the appropriate decision. Moab police did, however, ensure that the couple was separated for the night, putting Laundrie up in a hotel because they assumed him to be the victim.

About two weeks later was the last time that Petito’s mother heard from her. She was reported as a missing person on September 11 and a body matching her description was found near her last known location in Utah’s Grand Teton National Park on September 20.

Following the discovery of the body, police and the FBI obtained warrants to search the home of Laundrie’s parents as well as the van in which the couple traveled the U.S. and posted about their adventures in van living to a large social media audience. A hard drive was reportedly discovered in the van that may contain “evidence relevant to proving that a felony has been committed,” according the warrant asking for court permission to access the drive’s contents.

Laundrie is now reported to be “in hiding” by his family’s lawyers as many of those watching this story unfold taking his lack of cooperation with police to be a sign of his guilt. Due to his relationship with Petito as well as these reports of recent domestic violence, he has been considered a person of interest in the case, and that status has yet to be upgraded to suspect.

The family’s attorneys have announced that they will hold a press conference on the case on Tuesday.