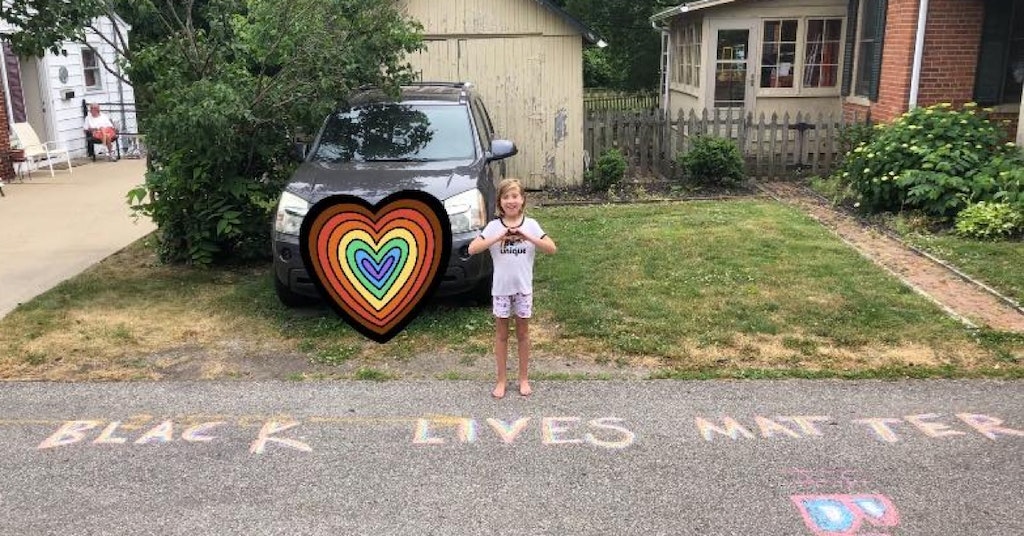 After noticing a 9-year-old girl writing “Black Lives Matter” in chalk outside of her own house, a nosy woman in Ohio thought it would be a great idea to — you guessed it — call the police on her.

Jenna Parker Acklin shared the store on Facebook last week, noting that her daughter, Mira, had asked her permission before heading out front to scrawl her support in colorful chalk directly in front of the family’s home.

“Absolutely! So proud of her kind heart!” Acklin wrote. “Aaaand, then 2 cruisers rolled up because the nasty neighbor called the police on my 9 year old.”

She says the neighbor reported “people yelling and people in the street,” but in reality, Mira was working quietly by herself while Mom sat on the porch and read a book.

Fortunately, the officers quickly realized there wasn’t any reason for them to be there, and, accordingly to Acklin, even encouraged her daughter to write “Black Lives Matter” even bigger.

“I do not regret letting Mira express herself,” she said. “She is upset and scared by I explained Billie (nasty neighbor) is an example of why we must speak up. Billie screaming ‘This neighborhood is going to hell!’ over and over again because my daughter wanted to show love speaks volumes.”

Tensions between the neighbors has escalated since the incident.

After Mira’s chalk work started going viral, the media caught wind of the story and drove out to Canal Winchester, Ohio, to interview the third grader and her mother.

Acklin says that Billie’s daughter came out to berate them while ABC6 was there, and somebody caught part of the altercation on video.

The woman repeatedly curses at Acklin despite several children being present, and repeatedly yells that kids don’t “mean anymore” than her mother — the one who called the police over chalk in the street.

The community as a whole seems to be supporting Acklin and her daughter, however.

“It was alarming that we’ve reached a point in life to where we have to call the police on a third-grader who just simply wants to voice her opinion and voice her feelings,” said Christopher Burton, who brought his daughter by to add to Mira’s designs. “I think that’s a very sad position of where we have come to be in the world.

Burton’s sentiment seems to be shared by others nearby, as Acklin said that community members and neighbors have come to help out or bring Mira more chalk so she could keep writing “Black Lives Matter” and similar messages of support as often as she wants.

And though Mira was shaken up by having police called on her, her mother saw it as a teaching opportunity.

“I said you know honey as uncomfortable as you feel, you also have to know your friends and other people of color feel this fear every day, multiplied times one-million,” she said. “She couldn’t understand why people would hate someone just because of their skin color.”

Perhaps that’s why Mira is undeterred by her neighbors’ hatred.

“I’m just going to make it bigger, and do it over and over again,” she said.