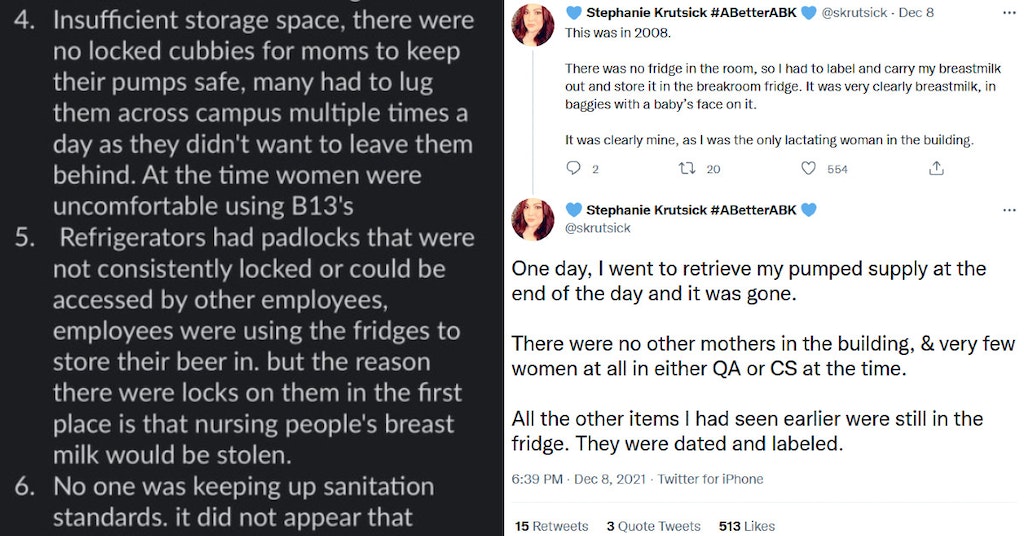 Workers at the well-known video gaming company Activision Blizzard are in the middle of a months-long campaign to address gender discrimination and sexual harassment within its walls after many came forward with complaints that reached all the way up the corporate ladder.

These allegations had been brewing for years before an article published in June laid out serious allegations of abuse as well as widespread efforts by company leadership to cover for and protect the accused abusers, leading to mass condemnation culminating in the recent announcement of an imminent strike.

Following this, the California Department of Fair Employment and Housing (DFEH) filed a lawsuit against the company for maintaining a “pervasive frat boy workplace culture.”

One of the more shocking and bizarre allegations to come out of this debacle involves the treatment that breastfeeding mothers received while attempting to work and continue to produce food for their infant children. A list of complaints recently highlighted on Twitter includes the fact that they had to place locks on the breast milk fridges because the stuff kept getting stolen.

While the complaint about the fridges, and the fact that they were often left unlocked, was not at the top of the list, it’s eye-catching for obvious reasons.

“Refrigerators had padlocks that were not consistently locked or could e accessed by other employees, employees were using the fridges to store their beer in,” item five reads, “but the reason there were locks on them in the first place is that nursing people’s breast milk would be stolen.”

We won’t take you down the horrifying rabbit hole of why someone might steal breast milk, but we can tell you that the culprits are likely to be men. And not just because of the story that a mother tweeted out to corroborate this claim.

“There was no fridge in the room, so I had to label and carry my breastmilk out and store it in the breakroom fridge. It was very clearly breastmilk, in baggies with a baby’s face on it,” wrote former Blizzard producer Stephanie Krutsick. “It was clearly mine, as I was the only lactating woman in the building.”

“One day, I went to retrieve my pumped supply at the end of the day and it was gone. There were no other mothers in the building, & very few women at all in either QA or CS at the time. All the other items I had seen earlier were still in the fridge. They were dated and labeled.”

Krutsick could only assume that the milk, which she badly needed for her child, was maliciously thrown out or stolen for “some creepy reason.”

At the same time, mothers complained about a lack of appropriate equipment to comfortably sit and work while pumping, a lack of apparent effort to clean and congealed breast milk on surfaces, and a lack of secure storage for breast pumps, which can be expensive and cumbersome.

In addition to complaints of abuse and discrimination, Activision Blizzard faces accusations of fostering a toxic work environment that pushes employees to overwork themselves to meet deadlines and disposing of them once a project is completed. All of this has culminated in a work stoppage at the company and the formation of the ABK Workers Alliance, which is currently raising money for a strike fund to support workers as they sacrifice income to fight for better conditions for everyone.