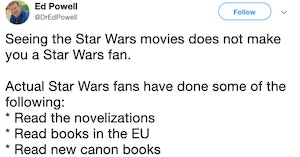 The latest Star Wars film, The Rise of Skywalker, has been pretty controversial. This is true of virtually all Star Wars films because the fandom of the franchise is pretty passionate. They’re also pretty divided. Some feel the latest movie has spit in the face of the progress that The Force Awakens and The Last Jedi exhibited, what with having women and people of color talking and all.

TROS walked back a lot of characters, particularly that of Rose Tico, who was relegated to a couple of lines after being a main character in TLJ. Some thought this choice by J.J. Abrams was especially shameful after the harassment actress Kelly Marie Tran received from racist trolls who couldn’t handle her character.

This isn’t a fight that will be resolved anytime soon—or probably ever! But it has led to some interesting takes from Twitter. A man named Ed Powell was the catalyst for a pretty hilarious discussion about what makes an “actual” Star Wars fan. He tweeted the following parameters:

* Read books in the EU

Not many people were very happy with this definition, even the folks who could meet Powell’s standards. Many people pointed out that this was totally arbitrary and not a definitive measurement of anything. They had their own contradictory lists that were even more absurd, if that’s possible.

Below are the best responses to the concept of being a “real” Star Wars fan. Hope you can meet the mark, otherwise, you can’t keep giving Disney your money. Sorry, those are the rules!

We all know this, but for the people in the back:

All it takes to be a fan of a thing is to like the thing. That's it. I'm a fan of mashed potatoes even though I don't go to MashTaterCon and don't read the Mashed Potato Extended Starchiverse.

Seeing the Star Wars movies does not make you a Star Wars fan.

Listen up, you’re not a real Star Wars fan if:

-You wouldnt risk everything for baby Yoda

-You wouldnt burn down everything for baby Yoda

the only "real star wars fan" is diego luna enthusiastically announcing his sensual attraction to jabba the hutt. pic.twitter.com/yyo55wDgBU

You aren't a real #StarWars fan if you never sucked on this Jar Jar lollipop pic.twitter.com/7QnmJN4knE

I am the only Star Wars fan.

Actually you’re only a real Star Wars fan if you do the following:

Sry folks, those are the rules. https://t.co/YQbeQTsiTC

You’re not a REAL Star Wars fan unless:

• You eat at least one DVD copy of Episode 2 every morning.
•George Lucas sacked your capital in Civ VI.
• You’ve called a Star Destroyer daddy.
• You name your kids “Phantom” and “Menace”.
• You kill any additional kids you have.

I mean what do I know but this seems like a terrible take to me. https://t.co/F2IxksZqOK

Real talk, you don't even need to dig the movies all that much to be a fan of Star Wars. Maybe you dig the outfits, the books, the comics, the theme park, the fan-fic, ewoks, whatever. Like what you like, it's fine, you can still come in the Star Wars Club, we have snacks.

Everyone knows youre not a real star wars fan until you write at least three (3) fanfictions about han solo and greedo having to share one bed pic.twitter.com/Y0riJHqfml

I mean what do I know but this seems like a terrible take to me. https://t.co/F2IxksZqOK

You're not a real #StarWars fan if you don't own at least 5 of these awful merchandise items. pic.twitter.com/cTyy3fFnwd

That tweet going around about being "a real Star Wars fans" was too good an opportunity to pass up for AI generated text completion, and apparently even the AI thinks that take should "enter the star". pic.twitter.com/e2Df0OJ6Yx

For the people trying to gatekeep and police who is and who isn't a "real" #StarWars fan: pic.twitter.com/T758pKHcSI

You're not a real #StarWars fan if you put parameters on what makes a real Star Wars fan. pic.twitter.com/ZLrH4ta8hQ

You're only a real Star Wars fan if you've contributed a painfully bad official name for a half-man, half-machine bounty hunter introduced in the Expanded Universe when you were nine years old. Haha, that means I'm the only real fan on Earth! Nyaah-nyaah! Pppppt!

to be a real star wars fan you have to draw Poe and Finn spooning, it's just the law I'm sorry

Where can I buy one