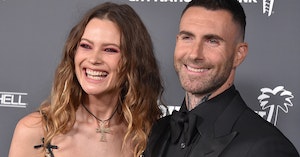 An Instagram model claimed to have had an affair with Adam Levine, and has DM receipts to back her story up.

Sumner Stroh made the revelation in a short, to the point TikTok Monday morning. In it, she says the two were seeing each other for about a year. She later said she had been under the impression things were over between Levine and his wife, Victoria’s Secret model Behati Prinsloo, and that they had just been “keeping it quiet to avoid the negative press.”

“My morals were unknowingly compromised,” she said. “I was completely manipulated.”

Levine had allegedly DMed her repeatedly from his verified Instagram account, and she shared screenshots of several of those exchanges.

One took place months after Stroh says she had stopped talking to the Maroon 5 frontman.

“Ok serious question,” he allegedly wrote. “I’m having another baby and if it’s [a] boy I really wanna name it Sumner. You ok with that? DEAD serious.”

Levine and Prinsloo are currently expecting their third child.

While Stroh’s claims haven’t been verified the internet took the story and ran with it.

And although Stroh later clarified that she didn’t realize he was still married during their affair, people had more sympathy for Prinsloo.

According to Stroh, she had never intended to come forward with these allegations because she knew the press wouldn’t be good for her either, but did so after learning a friend she had shared screenshots of the DMs with was trying to sell them to a tabloid.

Levine has yet to comment publicly on the matter.