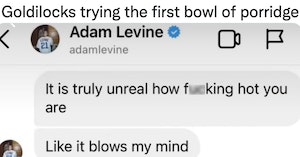 Adam Levine Is Getting Clowned For His Embarrassing Alleged Sexts

Adam Levine is still the talk of Twitter, after accusations that he cheated on his wife with an Instagram model and sent flirtatious messages to other women on the app broke over the weekend.

The singer denied the claims that he had actually cheated, while copping to crossing a line, which has led many to believe that he’s at least admitting the direct messages shared are, in fact, from him.

And they are…not good. I don’t mean they paint him in a negative light for sending raunchy texts while married to another woman; they’re just downright bad sexts. This is the kind of text flirting so embarrassingly dull and childish it could really only be done by someone who got famous while his brain was still developing and never had to put effort into getting women ever again.

This seems to be a somewhat common opinion, as Levine has gone right from getting blasted for allegedly being a cheater to being ridiculed and meme’d for having absolutely no way with words. Maybe this explains why Maroon 5 peaked with Songs About Jane.