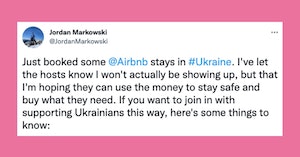 People Are Using Airbnb To Donate To Ukrainians Directly

Twitter is abuzz with a new effort to help Ukrainians fleeing the country as it’s invaded by Russian forces. They’ve started using the rental platform Airbnb to books rooms, which of course they have no intention of using. They probably couldn’t even if they wanted to. But the platform is allegedly on board with the idea and supposedly waiving fees for Ukrainian guests and hosts “at this time” but did not say how long this would be going on for.

“We appreciate the generosity of our community during this moment of crisis,” a spokesperson told Mashable in a statement. But the idea has taken off online.

“HOW TO HELP – just booked a Kiev AirBnb for 1 week, simply as a means of getting money directly into the hands of Kiev residents,” read one tweet. “It’s really cheap and can make a small difference right now.”

There are benefits to donating directly to citizens rather than organizations, as it puts money in their pockets more immediately, in theory. But Airbnb often has fake posts and housing opportunities, so you might also be funding a scammer. That’s kind of the risk of all donations, though, so if using a service like Airbnb makes the most sense to you for supporting Ukrainians, go for it.

Airbnb has said it would offer free housing for “up to” 100,000 refugees fleeing the country in late February. That would be great, and we shall see how it unfolds. In general, though, it’s a platform surrounded by a lot of controversy for the way users have driven up housing prices in many places and made it very difficult for regular people to rent or buy a house at market value. They may be waving fees, but it’s hard to say what the repercussions of feeding more money to the platform might be.