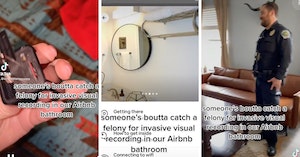 Airbnbs have become fairly normalized at this point, but there’s still more than a little to be cautious about when it comes to the idea of renting out a complete stranger’s home.

One TikToker’s experience in Austin, Texas, served as a jarring reminder of that uncomfortable truth after she discovered a hidden camera in the rental’s bathroom.

Her video shows a camera disguised as a charging cube before cutting to a screenshot of the Airbnb listing and a very short clip of two police officers standing in the living room.

It’s hard to imagine any non-malicious reason for leaving a hidden camera in a bathroom set up to host strangers, but the question now becomes who put it there.

“I assume the owners would be smart enough to hide it better, my best guess is their cleaning service put it there,” Brittany wrote, although it’s also possible it was left behind by another guest — or that the owners just aren’t that smart at all.

Regardless of who hid the camera, it’s definitely disturbing, and viewers want answers, too.

“You should have put a camera watching that camera to see who collects it,” one person suggested.

“I literally changed my clothes in a dark Airbnb closet the one time I stayed in one cause of this,” said @boolin.boling.

@upagainst pointed out that smoke detectors are a good place fo hidden cameras and noted “there are apps that can scan the wi-fi for devices that are cameras,” while someone claiming to clean rental cabins in Tennessee for a living said “there are cameras all over those cabins where they are not supposed to be.”

“This is why you don’t stay in an Airbnb and pick a hotel,” @cissybird said, and points were definitely made.

Brittany has promised to update viewers when police have completed their investigation, but it seems unlikely whatever they uncover will prove reassuring to the rest of us in any way.