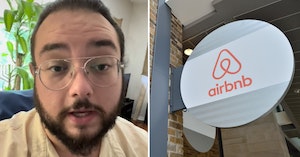 A TikTok user who participated in a research team that studied what went wrong with Airbnb has made a video explaining in basic terms why the service went from a cheap and fun hotel alternative to the expensive nightmare it is today.

According to Mr. Chris Chill, the problems all come down to the hosts, as well as the company’s failure to keep up with its own growth and rein in problematic hosts or deal with the massive number of customer service problems they create.

The Tiktok video was in response to another saying that the “era of Airbnb is over,” with Chill remarking that the original user is “100 percent correct.”

“The problem with Airbnb is their hosts,” says Chill. “The hosts are going to destroy everything that Airbnb was created to be.”

He goes on to explain that the name “Airbnb” came from a combination of “air mattress” and “bed and breakfast,” indicating that it’s an inexpensive service in which you stay in someone else’s home for a short period of time. Originally, it was meant to be a way for people with some extra space to make a bit of money while also allowing travelers to avoid often high costs for hotel rooms and similar services.

It also had the benefit of allowing travelers to meet a real local and get something similar to a bed and breakfast experience, but cheaper and also it’s not weird if you book a room alone.

Now, however, it’s a common complaint that various host fees jack up the price of Airbnb rooms to the point that it’s no cheaper than a decent hotel, but with fewer protections against bad experiences or even creeps who put hidden cameras in the bathroom. To figure out why this happened, Chill and a team of researchers looked into Airbnb’s business model, financials, and history.

“It boils down to the host because instead of grandma renting out her son’s old room that he moved out of when he got married, you know, it’s a big developer buying an entire apartment complex and then turning 80 percent of those into Airbnbs,” says Chill. “And then delivering very poor quality service while trying to be a hotel and operate it like it’s a hotel, and that’s not what Airbnb was ever meant to be in the first place.”

The second half of the problem was that, like any company under capitalism, all it cared about was growth. However, they grew so fast that they failed to get a handle on hosts trying to exploit the service or “learn to address problems in their process” in general. Chill believes this to be the cause of Airbnb’s current atrocious reputation when it comes to customer service, with many people coming forward to say they were left stranded without a place to stay with the company refusing to help them.

“They lack the ability to address the core problem of their customer service issues, which is their hosts, because … there are too many hosts for them to effectively manage.”

This is a more charitable theory for Airbnb’s current problems than some that have emerged. Others have posited that the company leaders don’t care about customer service and actually wanted to undercut the hotel market with a cheap service that was not initially profitable, then jack up the price once they became the standard. This is the model used by businesses like Uber and DoorDash, as well as Amazon and Walmart before them.

Either way, most seem to agree that the hosts are a large part of the problem, especially these developers using it to essentially create overpriced apartments while reducing the supply of actual affordable apartments, resulting in rent going up for everybody. Chill concludes by saying that he sure wished Airbnb would talk to him since he’s an independent researcher not afraid to tell the executive class what they don’t want to hear.

“We were just a bunch of graduate-level business students on a research team, so we don’t really care what some upper management person thinks if we criticize them.

Commenters have been widely complaining about how Airbnb has negatively impacted their communities, leaving little space for actual locals to live and pricing out families that have lived there for generations.

“[Y]ea, Airbnb hosts have destroyed the housing markets in small niche communities,” said one TikTok user. “San Juan Island is one such place.”

“Small tourist town here and ppl from Cali are coming in, buying, turning it into an Airbnb, and then not even living here!” reported another. “No more homes for locals.”