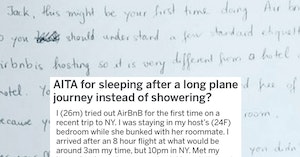 Ah, Airbnb, the app that can make almost any place seem totally wonderful and doable—even if the host is totally bonkers. Of course, there are a bunch of awesome listings all around the world that make it possible for renters to travel to remote areas on a budget while living like a local. But that’s definitely not what happened to one Airbnb guest, a 26-year-old guy named Jack.

Jack rented a New York City apartment from a woman who, to put it nicely, is concerned about cleanliness. After all, it is New York City we’re talking about—the land of bedbugs and subway pole germs.

Jack’s host flipped out because Jack “had a strong odor” and went to bed without showering. So Jack took to Reddit to see if he was in the wrong, or if his host was out of control in an “Am I The A*shole” post:

AITA for sleeping after a long plane journey instead of showering? from AmItheAsshole

Yep, Jack essentially smelled funky after a long flight (don’t we all?) and got called out by his host— who stayed in the same apartment and could smell him. Nothing a little fresh air (and a washing machine, which we’d assume she was going to use anyway) can’t fix, right? Also, RUDE!

While plenty of people were just curious about whether or not the host was planning on washing the sheets — a good question, considering sweat comes out in the wash:

Some people tried to find a diplomatic approach….

Others wondered just how dirty he was, and whether or not he was aware of how bad it was. Also, not showering before and wearing and wearing “outdoors clothes” on the bed DEFINITELY grossed some people out:

Next time, maybe don’t stay at a place where the hosts are also crashing?

Oh, and take a shower just in case.