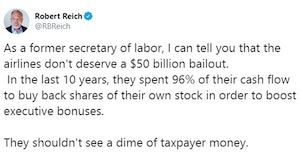 Currently, there is a fight going on in the U.S. Senate as Democrats and Republicans battle over key details in the coronavirus relief package. The Republican version of the package included heavy bailouts for big corporations hurting because the economy has ground to a halt and they failed to save for a rainy day. Due to the Republicans senators who are currently under quarantine, including Rand “How Will We Pay For It” Paul, the vote on the package went down as a stalemate, 47-47.

As Republicans use the opportunity to blame the situation on the Democrats, causing the hashtag #DemocratsAreDestroyingAmerica to trend on Twitter, multiple experts are explaining why airlines don’t deserve a bailout.

As a former secretary of labor, I can tell you that the airlines don't deserve a $50 billion bailout.⁰ In the last 10 years, they spent 96% of their cash flow to buy back shares of their own stock in order to boost executive bonuses.

They shouldn't see a dime of taxpayer money.

Former Secretary of Labor Robert Reich explains that over the last 10, airlines “spent 96% of their cash flow to buy back shares of their own stock in order to boost executive bonuses.” In other words, these companies have been buying up their own stock in order to make themselves artificially look good to justify bigger bonuses for the richest, highest-paid employees.

Representative Alexandria Ocasio-Cortez made the same point days ago, demanding that any bailout package for airlines include a ban on stock buybacks.

96% of airline profits over the last decade went to buying up their own stocks to juice the price – not raising wages or other investments.

If there is so much as a DIME of corporate bailout money in the next relief package, it should include a reinstated ban on stock buybacks.

Many Democrats, as well as everyday individuals, feel that the real drivers of the economy are the everyday people who go out and buy things like groceries and products and plane tickets rather than hoarding all of their money in offshore accounts and taking private jets everywhere. That is why they are fighting for a bailout for the people, demanding a livable amount of money be given back to actual taxpayers.

Fordham University School of Law Professor Richard Squire further points out in an opinion piece for the Washington Post that if airlines don’t get a dime in bailout money, they’ll be just fine.

“There is no danger airlines are about to disappear… Without a bailout, air carriers would renegotiate their terms of credit with their lenders outside court, or they would file for Chapter 11 bankruptcy protection. Either way, they would keep flying.” https://t.co/DlBGyHh0Q8

“Bailout-seeking companies typically portray bankruptcy as tantamount to corporate death,” Squire explains. “The airline industry’s own recent history tells a different story. Between 2002 and 2011, American, Delta, Frontier, Northwest, United and US Airways all filed for Chapter 11. All kept flying throughout, and all emerged intact.”

Others have pointed out that fewer people are going to be able to afford to buy plane tickets if they lose their jobs, their homes, and end up in the tap of poverty due to this crisis. Airlines could easily go bankrupt again even with a bailout.

How fast will airlines, hotels, and cruise ships blow through their bailout when nobody uses their services for months?

Senate Minority Leader Chuck Schumer is continuing to fight for a relief package that at least puts a leash on some of these corporate bailouts, and says that Democrats and Republicans are “very close to reaching a deal.”