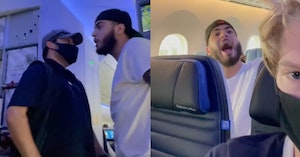 Anti-mask drama on airplanes continues to be out of control, and the latest viral video to depict one of these incidents is truly chaotic.

After a flight attendant repeatedly asked a passenger to hang up his phone and put his mask on, Alexander Clark (@starcadearcade), who was seated one row up, turned his camera on to record the quickly escalating altercation.

“What the f—k you talking to me like that for?” the unruly passenger yells at someone offscreen, presumably the flight attendant. “Take me off. I don’t give a f—k. I didn’t even wanna go to Cali.”

“I will find your name, date of birth, and address. I will know your social security number before I get off this plane,” he yells.

The man then pushed another passenger to get out of his row and go confront the employee face to face. Another passenger got involved as it looked like things were going to escalate, but the unruly man told him to mind his own business, “‘cause I will break your neck.”

That prompted more passengers to jump up in and try to calm him down.

The attempts to deescalate not only didn’t work, but wound up causing drama for Clark himself as the group realized he was recording, took his phone, and began threatening him, as seen in a recording by another passenger several rows back.

The original troublemaker was also heard declaring that he’s “the only [N-word] on this flight that’s fit to go to jail,” whatever that means.

Police reportedly did show up and escort the man off the flight, but it’s unclear if any further action was taken against him or anyone else involved.