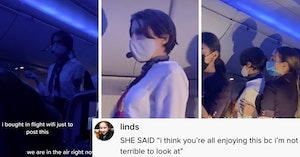 Every time there’s a new video of someone acting wildly inappropriate on a plane this year, it seems to outdo the last video, and the latest to go viral certainly doesn’t disappoint in that regard.

Musician Jawny shared a video he took on a recent flight just to show the nonsense he and the rest of the passengers had to put up with when one woman — who brought her own microphone — decided to try to give a speech to the whole plane regarding her thoughts on the pandemic.

When the video starts off, the woman is in the middle of complaining that the flight crew wouldn’t let her borrow a microphone, so she has her own that she’s going to use.

“The pandemic started all because humans have lost a little bit of faith,” she starts to say.

But the crew isn’t sitting back and waiting — one flight attendant is speaking right over her, warning that she’s about to get handcuffed if she doesn’t sit back down. The turn of events seems to surprise the unruly passenger, who immediately protests.

She then attempts to return to her pandemic speech, but soon finds herself trapped between people and being hustled along — although it doesn’t stop her from trying to screech out the rest of what she has to say.

“The reason the pandemic started is because nobody here has anymore faith, because you’re all stuck to your stupid devices and you don’t even know what reality is anymore. And you depend on stupid nonsense to determine your reality,” she continues as the crew leads her away. “My dog has more sense than any of you. In fact, my dog could be a better god for you people. My dog is my god.”

While this woman’s confounding attempt at a TED Talk mid-flight must have been incredibly obnoxious for the crew to deal with, people online, at least, were amused at the audacity and wildness of it all.

But it’s also disconcerting that people are continuing to act out regarding the pandemic on planes and cause drama for everyone else.

Another passenger on the same flight uploaded a video that shows the woman was ultimately escorted off the flight by police.