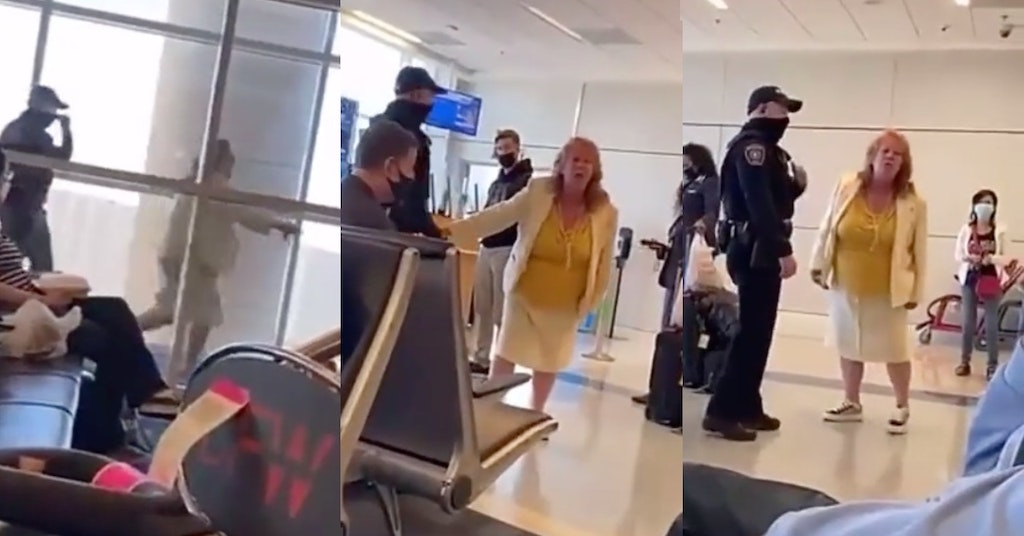 A woman being referred to as “Airport Karen” is bringing the term back to its original use after a video of her demanding to speak to the manager of the entire airport went viral.

The footage picks up as the hysterical woman is already in the midst of yelling at security. She screams her entire name, claims someone in a position of authority threw her to the ground, and insists that she wants “the manager of the f—king airport” as the guard escorts her out of the sectioned-off area they were in.

As she reaches the gate where scores of passengers are waiting for their flights and watching her display, she takes it up a notch, literally screeching as she demands to know who saw “him” choke her “to the ground.”

The guy recording the whole thing from his seat pipes up to inform everyone that what he actually saw was her running through a door to someplace she wasn’t supposed to be and that someone shoved her back out.

“You deserved it,” another person off-screen chimes in.

“I’m a woman! In a dress!” she howls in response, apparently forgetting that she threw on a blazer and not a dress that morning.

The guard tries to corral her to wherever they were originally headed, but the guy recording yells out “boo hoo.”

“Boo hoo?” her voice trembles with rage. “You f—k off. I want the manager of the airport here!”

We’re obviously missing a lot of context for the incident, but that hasn’t stopped Twitter from losing their collective mind over the audacity it takes to cause that much of a scene at an airport.

And people were more than willing to believe the bystander’s description of events over hers, all things considered.

But as much entertainment as people got from watching this brazen display of entitlement, it was hard not to notice the double standard that allowed it to play out the way it did.

Legend has it, her ghost still wanders the airport terminals, screeching for the manager who never comes…