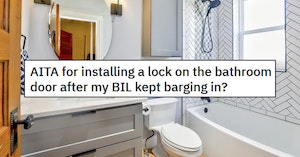 A rather one-sided entry on Reddit’s “Am I the A–hole” forum is blowing up over a story of a husband with a bizarre aversion to locks and a brother-in-law with an apparent aversion to knocking. Or he’s just a pervert creep who wants to see his brother’s wife naked, and somehow his brother is taking his side on this.

You may not be surprised to learn that this brother-in-law was staying with the couple because he was getting a divorce. It sounds like neither of the men in this story may be looking at any naked ladies outside of magazines and the internet for a while, at least if the husband doesn’t get his act together and beg forgiveness.

“My f25 husband’s m30, brother (BIL) m33 moved in with us after his divorce few weeks ago,” the OP wrote. “The problem I have is that he started barging in to the bathroom whenever I’m using it. He never knocks or anything. Another thing is that he only does this when it’s me in the bathroom not his brother. I told my husband about what I’d noticed but he laughed it off and called me paranoid. It was embarrassing because his brother would see me exposed and it made me uncomfortable.”

She further said that her husband said he talked to his brother about it and that he “apologized,” but then soon barged in on her again, rendering the apology meaningless.

Part of the problem is that, for whatever reason, this woman’s husband hates locks inside the house. She therefore agreed when they were married to dispense with all such locks, even on the bathroom doors. However, when she got fed up with her brother-in-law perving on her, she told him that she would be installing a lock on their bathroom door, and he didn’t object.

Then the brother-in-law barged in on her once again and she did the thing she said she would do, and husband got all mad.

“I had enough I went out and got a lock and installed it. My husband got home, saw it and blew up on me saying I voilated [sic] an agreement that I was part of and went against his wishes being uncomfortable with locks in the house. He demanded I remove it and promised and guarenteed [sic] that his brother won’t walk in on me again but I refused.”

After giving his wife the silent treatment like a child for a while, then accused her of being childish while trying to remove the lock himself. Based on this reaction and the advice of the vast majority of commenters, who voted her to be “Not the A–hole,” he and his brother might be about to become divorce buddies.

“So [m]y husband came home and I told him the lock will not be removed til his brother leaves and his reaction was to try and remove the lock himself and tell me to quit acting childishy,” OP wrote. “[W]hat I did was not shout or scream but pack a bag and go to my mom’s house for the next few days or so til this gets resolved somehow.”

The brother made the situation still worse, and by the end of the post a bit of a pattern was making itself clear.

“On my way out I saw my BIL in the driveway smoking. He knew what the argument between me and my husband was about but instead of stepping up to fix it he offered to take me to my mom’s house saying that my husband could use some space ‘from me’. This made me cry the whole uber ride to my mom’s house.”

“I did all I could to win his approval but he thinks less of me and thinks I’m childish just like my husband says.”

Thankfully, Reddit users stepped up to make it clear that these men should be on their knees to seek approval from her right now.