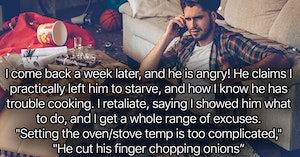 Some men have never learned how to take proper care of themselves and expect everything to be done for them, treating their partners like servants and, with any luck, discovering that that kind of attitude doesn’t fly anymore.

One woman took to Reddit to ask if she went too far in trying to get her boyfriend to learn to cook for himself while she was away on a work trip for a week because the only thing he knows how to use in the kitchen is the microwave.

For context, OP said, “My boyfriend grew up in a house that valued outdated gender norms. The women were always responsible for cooking and cleaning, so he didn’t learn how to do any of that for most of his life. That is, until he moved in with me after college.”

She went on to say, “He’s been good about a few things. He doesn’t mind helping with dishes or handling the laundry, but the one thing I can’t seem to get him to do is learn how to cook. The only thing he can do is microwave frozen meals.”

“I’ve been trying to teach him the basics, but it seems like it goes through one ear and just comes out the other. He still can’t turn on the oven or use the stove without help. The toaster is too complicated for him to use he claims. Doesn’t know how to boil eggs, cook rice, or even how to measure out ingredients using cups. I just don’t understand why he can’t grasp this but is fine with other things.”

With that in mind, she decided to try to save some money on his meals while she was away on her trip and gave him an in-depth lesson on how to cook the absolute basics in the kitchen and stocked up the pantry and fridge for him.

The plan apparently backfired, however, as the OP explained, “I come back a week later, and he is angry! He claims I practically left him to starve, and how I know he has trouble cooking. I retaliate, saying I showed him what to do, and I get a whole range of excuses.”

Those excuses ranged from “Setting the oven/stove temp is too complicated” to “He cut his finger chopping onions and couldn’t chop any until his cut healed” and even “He only likes the salad kits so everything is balanced.”

She said that he claims she’s an A-hole for not buying him his frozen meals and “leaving him alone to fend for himself,” and while she feels for him, at the end of the day, he really needs to take the time to learn his way around the kitchen.

The official Reddit decision was “Not Enough Info,” but plenty of users told OP that he was utilizing weaponized incompetence to make her his servant and that she should leave the man-baby.