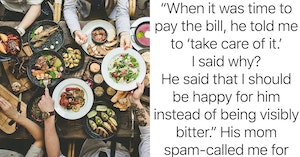 Another day, another married couple who refuse to share finances taking their woes to reddit for a judgment — which one of them will be the a—hole this time around?

u/Valley-Mountains3453 shared a story recently about an uncomfortable incident at a restaurant that left her storming out and her husband continuing to fume days later.

The whole thing started, she said, when her husband received an unexpected bonus at work.

“He was overjoyed [and] informed his entire family and planned for them to go out and celebrate with us,” she wrote. “He picked the restaurant, meals, drinks etc, I naturally thought he was going to pay for all that since it’s his happy celebration. But it turns out I was wrong.”

The redditor had previously explained that although they’ve been married for three years, they still keep their finances separate — though she says her husband occasionally tries to get her to pay for him, which she generally declines to do unless she specifically set out to do something nice for him as a gesture.

However, it turns out he expected her to pay for not only him, but his entire family, because it was a special occasion for him.

“When it was time to pay the bill, he told me to ‘take care of it,’” she recalled. “He insisted I pay and he’ll explain later. I refused and demanded an explanation, he said that while yes he is the one who got the bonus, he assumed I’d want to celebrate that and offer to cover the bill.”

A heated back and forth that involved the rRdditor’s husband admitting he hadn’t received the bonus check and saying he “might” pay her back later resulted in his family ganging up on her and she ultimately opted to simply leave.

“His mom spam called me for hours, and he went off on me at home saying I spoiled his celebration and joy because I’m feeling bitter, especially considering I had enough money to cover the bill right then and there,” she continued, eventually adding that he accused her of making a scene and kept holding a grudge for days.

The general consensus from other Redditors was that this guy seems like a leech, and acted completely inappropriately.

Unfortunately, the last update from the redditor said that her husband was annoyed about the post and disagreed with everybody’s comments. Somehow, I don’t think anyone is surprised.