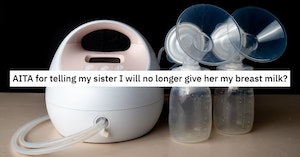 A young woman who recently went through the trauma of giving birth to a stillborn baby asked Reddit users for their thoughts after having an argument with her sister over breast milk. The OP of the “Am I the A–hole” post was advised by her doctors to pump breast milk for a while to avoid issues around that area, and just a week after her own baby died, her sister gave birth to her own child.

This took place at the height of the baby formula shortage, and the OP’s sister was unable to breastfeed. The Redditor therefore decided to take the generous step of not only giving her sister the excess breast milk she was pumping but didn’t need, but to continue pumping longer than her doctors said she needed to in order to ensure her sister’s baby would be fed.

Then the formula shortage ended, and the sisterly conflict began.

“I was advised by the doctors to pump for 3 weeks after the stillbirth to prevent problems for me, and then stop, otherwise I’d just keep producing milk,” OP wrote. “Due to the formula shortage, I have been pumping for 5 weeks now, to give the milk to my sister. Now that there is more formula in stock and she has been able go buy it, I told her I’ll stop pumping.”

Unfortunately, her sister didn’t accept that. Instead, she complained that her son was having stomach issues from the formula, which does often happen when making the switch from breast milk, and wanted the OP to keep pumping for her. When the Redditor revealed that the pumping was taking a toll on her emotionally, which is not surprising considering what she went through just weeks earlier, her sister didn’t seem to care.

“She said I am being selfish and she already has to feed her son by bottle (because she at first suggested I’d just nurse him for his daily feedings at least – we live next door, and I refused),” she said.

The fact that her sister “suggested” that the OP be her full-time unpaid wet nurse seems to provide a clue as to who is the selfish person in this story. Still, the poster tried to keep helping her sibling out, offering to pump for a few days longer in order to let her find a brand of formula that would work for her baby. This still was not good enough.

“I told her I’m sorry and I can pump for a few more days so she can put some in the freezer and have some back up until she finds a better formula for her son, but she said breast milk is healthiest and I should just help her out.”

“She called me a selfish AH and said that I am the embodient [sic] of ‘misery loves company’. My mother feels I should help my own sister out. My husband said my sister is way out of line. I feel really awful because I could still help her out and I know she needs it.”

Experts on mental health and pregnancy loss widely consider a stillbirth or similar loss to be a potentially traumatic event, and whether it reaches that point or not, losing a baby after developing that hormonal bond requires extensive grieving to process. Dr. Danny Horesh of Bar-Ilan University described going through a stillbirth as a traumatic even on par with sexual abuse.

“Stillbirth and pregnancy loss occur on a daily basis, but because it has to do with pregnancy, the loss goes under the radar,” she told Psychology Today. “Stillbirth is highly traumatic, and we should not neglect it in any way. Just like how we look at soldiers coming back from war, or someone who has gone through sexual abuse.”

This is one of those situations in which the answer to who was the jerk was very clear to Reddit commenters, who resoundingly supported the OP and assured her that it’s her sister who is the “a–hole” here.