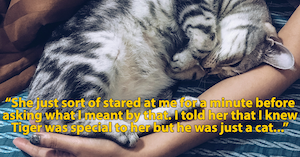 The loss of a pet is devastating. So is a miscarriage. There’s no point in trying to compare pain and create a hierarchy of sorrow — but one Redditor definitely made a mistake and did just that.

The Redditor suffered a miscarriage recently, right around when her friend’s cat passed away. The OP was kind of a jerk when she suggested that the death of the cat didn’t compare to her miscarriage instead of just offering compassion and acknowledging that we all suffer in our own ways. How can she make it up to her friend?

“My partner (30m) and I (38f) have a child and have been trying for another for about year now. We’ve lost three pregnancies all in the first trimester since then, with the most recent about 7 weeks into the pregnancy,” the OP said.

“One of my very good friends, Shelly (33f), is a total cat mom and refers to her cats as her babies which I’ve never had a problem with until recently. She has some health issues that mean it’s unlikely she will be able to have children, something she’s always wanted, and the cats, along with a bunch of honorary siblings help fill that need.”

“The issue came up recently because she just lost one of her cats quite suddenly. She’d had the cat since he was a kitten, almost longer than she didn’t. He was 16 when he passed away which is a good run for a cat, but I agree with her that it’s never long enough. She’s devastated and has really been struggling with the loss and trying to adjust to the change. She still has two cats but this was her first baby that was all hers as an adult.”

“This is where I might be the AH. I lost my most recent pregnancy about two weeks before she lost her cat and of course have been devastated. Our mutual friends have been very supportive to both of us (and were to our previous losses), but I really feel like Shelly is making a bigger deal than necessary about the loss of her cat and is kind of dragging things out. She’ll tear up or start crying out of nowhere and even though she doesn’t make a big deal of it and will even go out of the room for a few moments we all still know what’s going on.”

“I asked her the other day when she was wiping her eyes while we were all talking if she had talked about what was going on with her therapist because it seems like after almost a month she should be moving on already. She just sort of started at me for a minute before asking what I meant by that. I told her that I knew Tiger was special to her but he was just a cat, it wasn’t like she had lost a baby, an actual human and it felt like she was just drawing things out and should start moving on. She started to cry more forcefully and one of our friends wrapped her arm around her and said that I was just working through my own grief too and we all miss Tiger and know how hard this has been.”

“I said she was right, I did miss Tiger too, but that I was still grieving my most recent miscarriage, the loss of a real baby, and I wasn’t carrying on like she was. I got a bit of a dirty look from our friend who was comforting Shelly and from one or two of the others and they got up and left to get a drink and calm down. After they left one of my friends said I was cruel and an AH because we know how much she loved Tiger and how important he was to her, not to mention she had him for 16½ years and I only knew about the pregnancy for 3 weeks. They also said if I wasn’t able to handle things right now maybe we should stop trying for a little bit. So Reddit, AITA?”

“Uh…yeah YTA. Anytime you belittle someone else’s feelings by playing the pain olympics, you are being an as*hole. If she’d been the one to try to compare it, you’d be slightly justified. But bringing up out of the blue that your pain was more valid is just an unnecessary and asshole move. There was no reason for it. None. You’re entitled to your feelings, but so is she. You have to realize that she is also probably still mourning the inability to have human children, since it was something she has always wanted. Cats to her, are likely the closest she will have. And she just lost one,” explained

“I’m a little pissed reading your post, OP. My dogs went to heaven just recently and I’m still grieving. Years ago I had 2 miscarriages. But I still remember the pain. So how are those 2 different? Nothing. Pain is pain. Hurt is hurt. So yes, YTA. And remember, she can’t bear a child thus her cats are the closest she can have,” said

“Absolutely YTA. I’ve had five miscarriages and lost a young cat to a sudden and unknown heart problem. All are awful and grief riddled, and it isn’t a competition. Compassion matters. If someone feels loss and grief, their feelings are valid, regardless of your experiences,” reminded

“YTA. You were incredibly cruel to your so-called friend. That cat was a member of her family for sixteen years and you think it should take a certain amount of time to get over his death? You should understand better than anyone that grief takes many shapes and doesn’t have a timetable. It’s extra insensitive for you to compare her cat to a baby when you know she can’t have babies of her own and she will never know what it’s like to lose a human baby. Stop playing Grief Olympics and comparing your grief to everyone else’s. You owe Shelly an apology and I think you’re the one who needs a therapist, said

“Yikes, so she likely wants to have kids but can’t, is grieving the loss of a beloved pet and you threw ‘it’s not like you lost an actual baby’ at her?? Please read that back and think about that. I’m so very sorry for your loss but in this instance, YTA. Best wishes to you on your journey but please apologize to your friend for this,” said