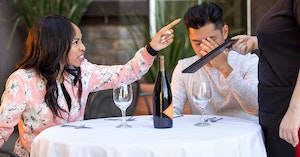 A story about a customer getting kicked out of a restaurant and embarrassed in front of her whole family is serving as a brutal reminder that bad behavior will frequently come back to haunt you.

u/naptide explained that a few weeks earlier, a woman had come into the bar and grill where she works with a man and subsequently “left me an unhinged note on a napkin calling me a slut for wearing shorts and a crop top while working in 90 degree heat… At a sports bar.”

Fortunately, the staff at the grill had a good sense of humor, and the manager actually bought a frame for them to hang the note and the receipt — which included the customer’s signature and the word “whore” instead of a tip — up on the wall. The woman was also put on a “do not serve” list.

But the server says the customer returned a couple weeks later, celebrating her son’s college graduation with a large group of friends and family. They wound up in her section, and she informed the woman that she would have to leave. The woman didn’t take kindly to that, so the Redditor pulled the framed note off the wall and reminded her what behavior and led to this point.

“I read it aloud. And then I said the establishment has a policy that we cannot serve people who behave erratically or aggressively after drinking,” she wrote. “And I was happy to serve the rest of the group but I’d have to ask her to leave.”

After some screaming, the woman finally left, and the entire party went with her. The server expressed surprise at that, and said she felt bad for the son who “looked really ashamed and stressed through this… Because he was just trying to celebrate his graduation and it’s not like his fault his mom is a little crazy.”

Readers acknowledged that it was a tricky situation, with other people getting caught in the middle of things thanks to one woman’s decision to treat the waitstaff poorly.

But the general consensus was that the server was in the right to ask her to leave.

However, the original poster did repeatedly seem surprised and frustrated that the entire group left, and that sparked its own mini-debate.

“Do y’all enable your families like that? No wonder there’s so many adults out there who can’t act right,” she wrote in an edit. “If this ever happens, please don’t leave. Having a large table leave their reservation during peak hours without even a tip really screws the staff over… at least tip for the trouble caused.”

Interestingly, people in the comments pointed out that a somewhat similar story recently went viral on TikTok, prompting further debate as to whether this had actually happened to the Redditor at all. But the lesson still remains—don’t be a jerk to your servers. How have we really not learned that by now?