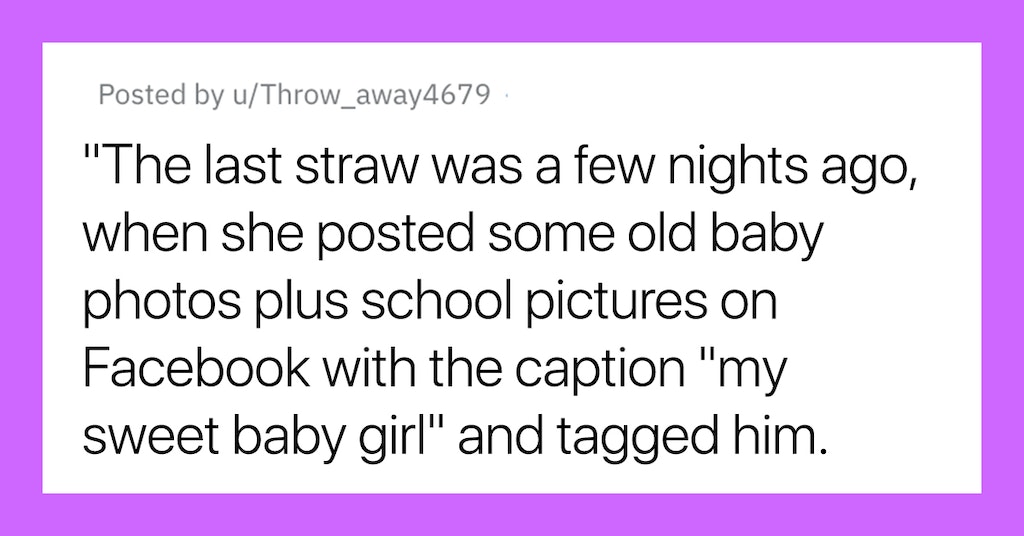 
The world is gradually becoming more accepting when it comes to transgender people, but there are still people out there who just can’t handle the idea — especially if it’s their own kid coming out to them.

One concerned father took to Reddit’s Am I The A**hole forum after an argument he had with their wife regarding their trans son. Specifically, Dad says he has come to accept his son for who he is in the ten years since he first expressed that he “felt like a boy” at age 8, but Mom still hasn’t come around.

“Now our son is 18 and 5 months ago he told us he wants to start his transition and change his name,” he writes. “For years I came to accept that this was something that was going to happen when he got older. My wife however is still insisting maybe he’s just a tomboy lesbian.”

Dad admits that he’s had his own struggles when it comes to “learning to view my child as not my ‘daughter,’ but my son,” but he’s worried that his wife is still stuck in that place, convinced that she’s “losing a daughter,” as she puts it.

“He’s barely about to start the [transition] process…and she keeps telling him to seriously think about the ‘consequences’ and trying very hard to convince him not to do this. He has already told us his chosen name which she still won’t say because the one we gave him is ‘such a beautiful name,’” Dad explains.

However, things escalated when his wife posted old childhood photos of their son and tagged him on Facebook, alongside the caption “my sweet baby girl.”

“That immediately pissed me off and I told her to delete it, which she did,” he says.

He also adds that his wife tried to feign ignorance as to why sharing “some of her favorite memories of them together” was so wrong, but he told her she knew exactly what the problem was and “needs to get over herself and be there for him because he’s the one who needs the support right now.”

That led to a big fight, with his wife insisting that he has “no idea what she is going through as a mother mourning her child,” because he’s “gaining a son and she’s ‘losing a daughter.’”

While the original poster is still certain he’s doing the right thing in supporting his son and trying to get his mother to see the damage she’s causing, after speaking to his sister about the incident, he admitted he’s not sure being so stern with her about the whole thing was the right approach.

Redditors, however, quickly rallied behind him and told him he wasn’t a jerk for laying things out and demanding his wife change her behavior — after all, many pointed out, it’s been ten years.

“It’s been 10 years since the son told them he felt like a boy. 10!” wrote u/WeeklyConversation8. “She’s been in denial for 10 years. She should have gotten therapy immediately. Instead she wants to keep being in denial.”

“The 1840s called, they want their gender binary back. F—k all the way off, and stay there. I wonder what her reaction would be if she was ‘gaining a daughter’? I’m going to lean heavily towards ‘still f—king awful’ because her child’s transition is all about her,” scoffed u/beetrootfuelled.

Many people thanked the OP for both supporting his son and refusing to enable his wife any further, noting that suicide rates for trans youth with unsupportive families are high, and if parents truly love their child, they would want them to be happy and healthy and not try to pretend to be something they’re not.

However, u/TimelessMeow shared a reminder that sometimes trans people “end up having to cut out supportive parents because it subjects them to the one who is being toxic,” and suggested the well-intentioned father come up with a plan regarding what he’ll do should his wife never come around.

“It’s one thing to struggle to accept things, it’s another to refuse to even try and it seems like she’s falling into the second category,” they wrote. “Even if he isn’t showing it, there’s no way this isn’t hurting him. He knows she loves him as her ‘daughter’, but do you truly think she loves him as her son?”

Dad was easily rated “Not the A-hole” in this situation, but it sure doesn’t make things any easier for him, stuck between his wife and his son and just trying to do the right thing when one person won’t.