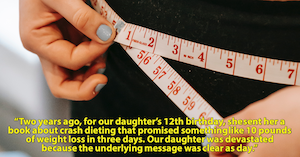 Dad Tricks MIL To Get Her To Stop Sending Fat-Shaming Gifts To His Daughter, Asks AITA

Grandparents can be wonderful — if they respect your children. We hear a lot of stories about the fun and amazing times kids have with grandparents who spoil them, buy them gifts, and take them on adventures. Unfortunately, we also hear about grandparents who have toxic belief systems and impose them on their grandchildren.

One Redditor has a MIL who seems bent on getting her grandchild to lose weight — and one of the ways she’s encouraging this is by giving her not-so-subtle gifts that are related to weight loss. The OP decided to trash the fat-phobic items and now has to explain his reasons to his wife.

“I [42m] have been married to my wife [39f] for 15 years. We have a wonderful 14-year-old daughter and an 8-year-old son. My wife’s mother has some views that I don’t agree with. Two years ago, for our daughter’s 12th birthday, she sent her a book about crash dieting that promised something like 10 pounds of weight loss in three days. Our daughter was devastated because the underlying message was clear as day. It was a month until she started eating a whole plate of food for dinner again,” the OP writes.

“Our daughter is a healthy girl. She is highly active, studious, and most importantly, happy. Her grandmother believes that she’s not reaching her ‘full potential,’ whatever that means, and thinks that she’ll be on the front covers of magazines if she can just shed some weight. Since she made these views clear to me, I have made it my mission to block any unsupervised contact, and this includes gifts.”

“About a month ago, with my daughter’s upcoming 14th birthday, Grandma texted me asking for our new address. Normally she would ask my wife, but since she didn’t answer within 10 minutes, she texted me instead. My wife would have given her our real address, but I was able to respond first with a fake one and tell my wife no response was necessary. I couldn’t guarantee that I’d be home to intercept any gifts, and my daughter would open something addressed to her. It gave her some numbers/a street somewhere that I wasn’t even sure existed.”

“A couple of weeks later, after my daughter’s birthday, I realized that it did not in fact exist as her package was returned to her. Both she and my wife were furious, and my wife amended the address I gave her before. Grandma insisted it was a completely innocent package. Well, the day it was scheduled for delivery, I decided to work from home. When it arrived I opened it up and found a baton twirling uniform (my daughter’s hobby). Sound innocent enough? It was at least two sizes too small.”

“I sat my wife down with the stupid thing in front of us and said it was clearly intentional, which my wife refuses to acknowledge. Now she and her mother are even madder at me for throwing the uniform into the neighbor’s garbage (with the neighbor’s permission). Did I handle this correctly?”

“NTA. You don’t have a MIL problem. You have a wife problem. It’s time for you and your wife to have an honest discussion about how she views your daughter’s weight,” said

“OP has a HUGE problem at home if wife agrees or treats this 14 year old girl like grandma. Grandma and wife are fine with giving this 14 year old teen insecurities, eating disorders and needing years of therapy. NTA but OP needs to do something before is too late.”

“So. I applaud you standing up for and protecting your daughter. For that, you are NTA. While people are quick to say you are, as you didn’t communicate with your wife… given that she refuses to see an issue with her mother doing this, i disagree with Reddit and you are NTA there, as well. Bravo to you for prioritizing your daughter. She needs someone in her corner, for sure. That being said, I would make an appointment for couples counseling, and talk to the counselor specifically about this issue, how your wife doesn’t have concerns with it. You two do need to communicate, and get on the same page. Your MiL needs to stop bullying and body shaming your daughter, who sounds like a normal, healthy child. MIL can go pound sand. I would go as far as to talk to your daughter – does she even want to see MiL? Otherwise, go low / no contact,” explained

“NTA. Your wife is disrespecting your values as the other parent, and your daughter’s mental well-being, in order to enable her mother’s incredibly disgusting behavior. You’ve already experienced the damage it did previously, your wife is being irresponsible by allowing it to happen again. She needs her eyes opened to the harm she’s opening her daughter to,” said

“NTA. your MIL is trying to get your daughter to have an eating disorder. You need to protect her from that. However, the way you went about it was wrong. It was always only going to work once. What you need is something that is the equivalent of a post office box or a parcel locker that you can give your MIL (might be a bit late now though). That way you can be sure to intercept any presents and vet them for safety,”

“NTA. You’re doing your best to protect your daughter from an aggressive and abusive grandma. I don’t have a good solution. I suppose you can ask your wife how she’d feel if you bought her clothes too small to fit her. As her how she’d like it if all your contact was insisting she was unhealthy. I don’t know if you can get through to her. The only other option is to talk to your daughter, reassure her, and try to build her up against mom and grandma. Tell that sometimes people do mean and nasty things. Tell her that if she’s happy, then that is what matters more than someone else’s opinion. That other person doesn’t have to live her life, she does,”