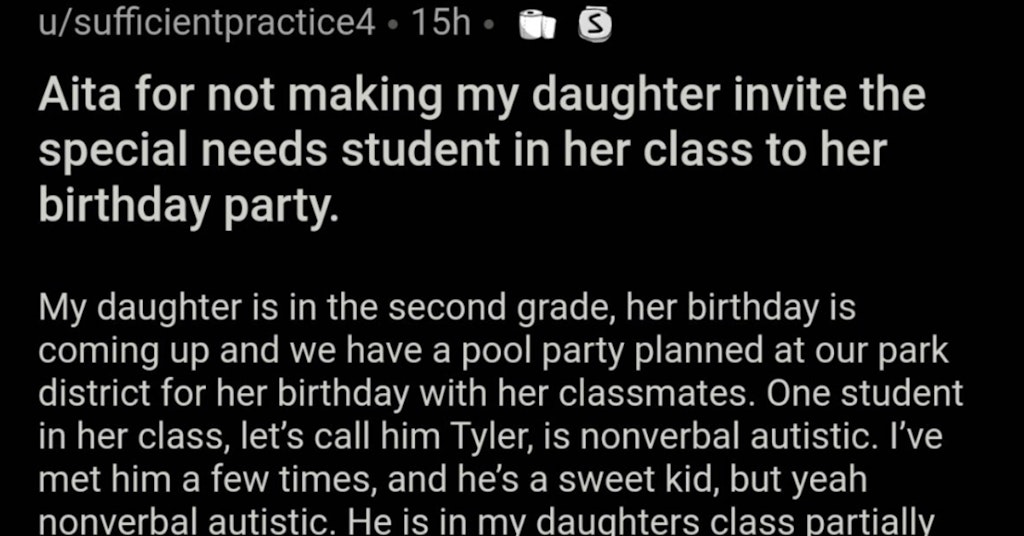 If you ever need a good rabbit hole to go down while in a waiting room, Reddit’s “Am I the A—hole” (AITA) sub will take you there. People post life situations they need clarity on, and Redditors give their thoughts.

In a recent AITA post, a mother asked: “AITA for not making my daughter invite the special needs student in her class to her birthday party.”

She describes the situation with her daughter’s birthday party in the post.

“My daughter is in the second grade, her birthday is coming up and we have a pool party planned at our park district for her birthday with her classmates. One student in her class, let’s call him Tyler, is nonverbal autistic. I’ve met him a few times, and he’s a sweet kid, but yeah nonverbal autistic. He is in my daughters class partially but leaves midway through the day to go to a special program or something.

Now I told my daughter she can either invite all the girls, or the entire class. I am not letting her invite specific people and single anyone out. She ended up choosing the whole class, but my daughter, as respectfully as a second grader could be, asked me if it was okay if Tyler did not receive an invite. She said he’s barely in her class and doesn’t really know anyone, and it might be tough for him to be at a pool party.”

Well, we were on board with the “invite all the girls or the entire class” rule. But that seemed to change rather quickly.

“I talked to my husband about this and we ended up deciding that she does not have to invite him. She has to give out her invitations through mail however, because I do not want him seeing her giving invitations out.

Anyways, I was talking about this at my work with a couple other nurses and a few of them thought I was being horrible by telling her she didn’t need to include the child with special needs. I said that I do not have any experience handling special needs children, and I didn’t know if he would need special assistance or even need his mom or a caretaker there the whole time. A coworker told me I made a huge mistake by “teaching my daughter that it’s okay to exclude those who are different”. Idk if I’d read that much into it.”

So, let’s see what the people of Reddit have to say about this situation. Here’s the top comment, which received 15.2k upvotes:

“YTA. You are definitely teaching your daughter that it’s okay to exclude people who are different. It’s not your choice if he can handle the party or not. He should absolutely receive an invite and his parents/caregivers can decide if he’s capable of attending.

ETA: I missed the fact that you’re a fucking NURSE because I was so mad already. You really should know better. I hope your coworkers report your lack of compassion to the higher ups because I can only imagine what your bedside manner is like.”

Yep, just as expected. The comment below echoed the sentiments.

“Seconding this! OP, you’re not his parent or his caregiver. It’s not your place to assume that a pool party would be tough for him. Too many children with different needs spend their childhoods being left out. Did you verify that all the other children in his class know how to swim or like swimming before you invited them??

Also, if you have to mail invitations because you’re afraid of how it will make another child feel… you already know YTA.”

He’s non verbal autistic. Do you think for a second that that you’d actually be expected to care for him or be responsible for him at the party? Do you really think they’ll just dump him off on his own? If his parents decide he can attend, I guarantee he’ll be accompanied, and probably not even stay long, if he’s allowed to attend.

Also, it’s a public pool. It’s not even like you have liability of something bad happening at your house. Other kids have issues, too, and you’re okay with whatever they might bring to the party: food allergies, not being able to swim, asthma, etc,.

“As the father of a non verbal autistic child who loves swimming and birthday parties, reading shit like this really hurts. OP YTA and thanks for perpetuating your daughter’s being a future asshole.”

“I have non-verbal autistic twins girls, they’d basically live in a pool if i let them.

OP, YTA you took an opportunity to teach your 7, she’s seven man, a lesson about inclusion and compassion. Not only are you clearly the AH, you failed at teaching your child an important lesson that people are equal regardless of circumstances.

One of the specialists who works with my children did her master’s thesis on how integrated classrooms help both the spectrum and neuro-typical children learn compassion for other humans.”

Yeeeaaaahhh… people were (understandably) not happy.