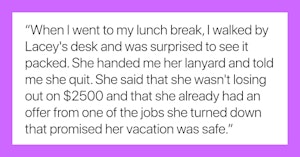 Manager Stunned When New Employee Quits After He Scheduled Her To Work During A Pre-Planned, Nonrefundable Vacation

A manager learned a difficult lesson recently after denying a new hire’s vacation time, and the people online he turned to for sympathy had none to spare.

u/Artistic-Comment20 told his story in Reddit’s Am I The A—hole, informing readers that he works for a large company and hired a new person who he refers to as Lacey last week.

Before she got the job, Lacey informed our dear Redditor that she already had a non-refundable vacation scheduled. As the manager schedules his own team, he told her he would make an effort to accommodate her plans, and brought her on board.

“I couldn’t accommodate her at all,” he claimed. “There’s already another team member out. I put up the schedule and was very surprised at an e-mail from Lacey regarding her vacation not being scheduled. I informed her we didn’t have the flexibility and that she was expected to work.”

Management in the United States is so controlling that he fully expected her to just work through her planned vacation without a fuss, and was shocked to find out that’s not what Lacey had in mind.

In fact, Lacey packed up her desk and quit the same day.

“She said that she wasn’t losing out on $2500 and that she already had an offer from one of the jobs she turned down that promised her vacation was safe,” he admitted. “I am not being called into my boss’ office because she quit so fast, but in my experience, if you start a new job, you understand that you are last for vacation.”

While that may be true in the case of scheduling future vacations, redditors were quick to point out that it doesn’t work that way for events already planned before accepting a new job — and that the manager was an idiot for thinking he could walk all over her like that just because she’s new.

Another big takeaway for readers was that an employee quitting so suddenly reflected poorly on the manager — as it should have.

“I’m glad OP’s boss called them in to explain themselves,” wrote one redditor. “Hopefully the higher ups have a nice long conversation with OP about their little Napoleon complex.”