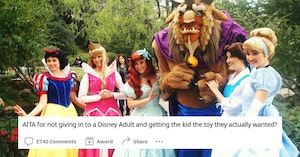 Photo via Jennie Park/Flickr (CC BY 2.0)

A recent entry in Reddit’s famed “Am I The A–hole” forum may horrify and disturb those lucky enough to have avoided previous exposure to those people speak of in hushed whispers around the fire as “Disney Adults.” The woman who posted her scenario for judgment has a sister who is one of these, and that sister had a child, and now that kid is suffering the consequences of having a mom who is way too into Disney stuff and needs to calm down.

According to the OP, this is such an advanced case of Disney Adultism that her sister will throw out any gifts that are not Disney-themed—either for herself or her child, often right in front of the gift-giver.

“Before my niece was born Elsa sent out a Facebook post and a family-wide email that anything without a Disney character on it, toys, clothes, bedding, furniture, anything, would get thrown out,” the Redditor explained. “Not donated, thrown out.”

“Disney is her aesthetic and she’ll throw things away in front of the people who gift them to her if they’re not plastered with cartoon characters.”

Unfortunately for this lady, her child has turned five and is starting to get a mind of her own — and what she really wanted was something from the Magic Mixie toy set after seeing that her friend had one. So that’s what the OP got her, with permission from the kid’s dad who says he “gets her other stuff all the time.”

But this did not go over well with the Disney Adult, dubbed “Elsa” for this story, who tried to follow through with her threat and launched a whole bunch of unnecessary drama over the children’s toys.

“After the party was over, Elsa went apes–t and said it’s my fault she has to throw her kid’s toy away,” she wrote. “Apparently she and BIL got into a big fight when she tried to throw it out during the party. She also tried to give it to several of the parents at the party. The moms from her mom group called her insensitive that she’d try to get rid of a toy her kid was so excited about and asked if she was going to do that with their gifts.”

Then, of course, the sisters’ mother had to get involved, calling the OP and making her feeling like the a–hole for making trouble by giving a five-year-old girl the toy she wanted for her birthday. Elsa is now apparently not the most popular mom on the block, though how she managed to retain any friends while being like this may be the biggest mystery to come out of this tale.

“My mom called me later and said I was a huge AH for not sticking to what Elsa wanted and ‘making her anxious about the presents’ because I guess after the party, her mom group friends got pissed at her when they found out she throws gifts away so she and Niece are uninvited from a lot of spring activities.”

It’s not too surprising that the OP in this case has been voted “not the a–hole” by Redditors, who took to the comments to share their own horror stories about Disney Adults and make Frozen jokes.