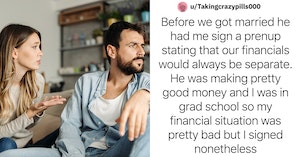 A confused woman took to Reddit to get opinions on the infamous “Am I The A–hole” forum after finding herself in serious conflict with her husband because she laughed at the idea of voiding the prenuptial agreement he had asked her to sign in the first place.

The request’s timing suggested to her, and many other Reddit users, that it was not about her husband gaining more trust in his spouse or wanting to feel closer to her, but because he seemed to realize that he was no longer making more money than she was.

According to the post, when the couple married, he was making decent money as a software engineer while she was going to graduate school, racking up student loans while picking up a small paycheck on the side. She agreed to sign a prenup which stated that “our financials would always be separate and the only thing we would share was an expense account to pay for household-related fees.”

Some would take this request as a red flag, but at the time, it didn’t bother the Reddit user much. Perhaps another red flag, however, was her husband’s refusal to discuss his salary with her, claiming it to be “rude.” For years, the couple didn’t discuss their personal finances even as the poster graduated and got a job that she estimated to be paying her three times more than what he made, based on her knowledge of his starting salary and promotions.

Finally making bank, she decided to buy a new car, able to do so in cash with the money she had saved up in her separate bank account. When her husband found out that she had been able to do this, he was shocked, and pretty soon was bringing up that old prenup again.

“He didn’t talk after that and I thought that was that,” she wrote, “however after a few hours he came back to me and told that he thinks we should void the prenup……This is where I might be the asshole I laughed in his face and asked him why I would agree to that and his answer was that we’re married and should share our financials.”

Laughing in someone’s face when they didn’t make a joke (or didn’t think they were, anyway) can be considered rude, but considering the context, the request likely would have been a surprise to anyone — even, as the OP put it, suspicious.

His reaction to this did nothing to alleviate her suspicions.

“So I told him that we’ve been married for 6 years and yet we’ve never shared financials and I was fine with what we were doing, and his sudden change of heart was very suspicious. He called me a bunch of names and stormed out and didn’t come home and and I guess he told his family about our fight and they called to berate me and say how he supported me while I was in school (he didn’t) and now am wondering if I was the a–hole??”

The resounding decision from Redditors is that this high-earner was not the a–hole in this situation. In fact, the negative response to her husband’s behavior was so strong that she is now reconsidering the entire relationship, calling it a “sham” in updates.

“This post has really made me question everything in my life, I think am going to take a leave of absence from my work to sort out my life,” she said. “My husband was only my second relationship and I guess I was too caught up in school, work and debt to really see that my marriage was a sham.”

While her husband may not be, Reddit commenters have been very supportive of her decisions.