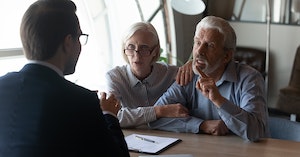 A man posted on Reddit’s popular ‘AITA’ subreddit after his late fiancée’s parents reached out to him to demand that he pay the Ivy League school tuition for their other child, his late fiancée’s brother. The history of user u/Unable_Sandwich9545’s relationship with his almost-in-laws is a difficult one, as they blamed him for their daughter’s death in a car accident a decade ago.

The Redditor explained, “She had moved across the country to be with me after she finished university,” a fact which her parents would never forgive him for, saying that “it would not have happened if I hadn’t dragged her to California.”

He went no-contact with the family for the last ten years and has since met and married his wife of nearly a year. Things get even more complicated, however, as the Redditor was the beneficiary of his late fiancée’s life insurance and has made a decent amount of money in the years since losing her.

“I was working for a FAANG company when MG died. I was the beneficiary to her life insurance,” he went on. “I was having trouble concentrating [at] work so I took a leave of absence. After a couple of months of trying to join her I realized she would hate what I was doing to myself. So I resigned my job and used the insurance money to fund my own little start-up.”

“I’m not Oprah rich but I do okay,” he said. “MG’s little brother was recently accepted to an Ivy League school. I know this because him and his parents all reached out to see if I would give them the insurance money to help with his tuition.”

u/Unable_Sandwich9545 is still torn up about how the family treated him, writing, “These are people who I thought would be in my life forever and they abandoned me at the lowest point in my life. I had friends but I have no other family. They didn’t just abandon me. They made it worse.”

“Now they need my help. They say that if I don’t give them the money they will have to take out a mortgage on their house to pay for his education. They said I was in the wrong to even keep the money and that it should have gone to them to begin with,” he shared. “I loved these people once but they destroyed me. The money they want is negligible to me. I could give it to them without in any way compromising my lifestyle. I want to brag about how little it will affect me but I feel petty. It’s just not much to me but it is life changing to them.”

He concluded the post by saying, “My wife says it’s my choice. I want to punish them for how they treated me. But I know MG would want me to help her family.”

The people of Reddit were quick to tell OP that he was NTA, and that MG’s family was likely scamming him for the money they felt that they “deserved.”