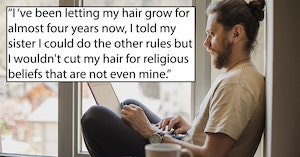 Wedding rules and demands can range from the mundane to the absolutely outrageous, as one Redditor using a throwaway account found out when his future BIL tried to demand he cut his hair to conform to his religion for the ceremony.

“I(28m) have a sister (30f) who is marrying in 1 week and a half from now,” he wrote. “She and my parents are kinda conservative but nothing too much, [except] her fiance(33m) is evangelical and really religious. We never got along well and had a lot of discussions, he really disagrees with a lot of me and try to change me, like for example my bisexuality, political views, lack of religion in my life etc.”

He continued, “Well here’s the problem, when my sister announced her wedding i was happy for her despite my problems with her fiance, but when i received the invitation to the ceremony came a lot of rules like no drinking, no drugs, and men should cut the hair short and have no facial hair, apparently this are evangelical rules her fiance imposed.”

“Well i have long hair for a man right now its shoulder length, and been letting it grow for almost four years now,” OP said. “i immediately contacted my sister and said that I could do the other rules but I wouldn’t cut my hair I been styling for four years over one day for religious beliefs are not even mine.”

OP’s sister wasn’t having it. “She started to try to convince me to do it and that men shouldn’t even care about their hair that much, she said that as her brother and an important person in the wedding i would be embarrassing them with my hair and that i should leave this rebellious phase behind especially if I wanted a better job(currently a school teacher and loving my job lmao).”

“We discussed and fought a lot over the week about it and I ended up saying that if she did not want me as myself I simply wouldn’t go, she said she would take my invitation off if I could not do that,” he said.

The ultimatum shifted when their parents got involved. “well 4 days later she texted me saying I was still invited, apparently my parents pressured her to make an exception for me because she would regret not having me there(I never asked for that they did it on their own). But now both sides are calling me an asshole for creating all this drama and my inability for conceding especially my parents who agree with my sister and fiance but think me not going would be worse.”

The people of Reddit reassured OP that he was NTA in this situation.

He posted an update later on, saying that he had inadvertently created more family drama by refusing to cut his long hair for the wedding — which he, unfortunately, can no longer attend because he caught COVID.