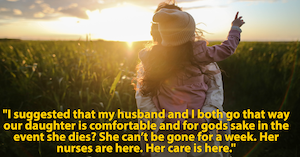 Dealing with in-laws can be challenging in the best of times. But when a child is suffering?

One Redditor is coping with the fact that her daughter, who is almost three, is dying of cancer. The situation is so horrible, but the OP is doing her best to make memories with her daughter and also keep her child happy and comfortable. Unfortunately, she’s also trying to manage her mother-in-law, who seems to not have this child’s best interests at heart.

“I have an almost three year old beautiful little girl. She’s just a few weeks shy of her third birthday. My baby was out in hospice four weeks ago after having gone into remission late May. Unfortunately, the cancer has returned except it is now crushing her optic nerve and is about 8cm long. Multiple doctors recommended we make our daughter as comfortable as possible as they do not believe removing the tumor is a good option. I have so much to say in regards to her diagnosis but heartbroken will suffice for now,” writes the OP.

“My husband and I have been making tons of memories with her for the past few weeks. We’ve included family in some of these memories, but we both feel that we want to spend as much time with our daughter as possible. My mother in law called me yesterday to tell me she booked tickets/hotel/airfare for a trip next month. I thought it sounded fun until she said she was taking our toddler with her. Just her, my daughter, and her husband. She did not invite my husband and I.”

“My daughter isn’t even three yet. She has never stayed overnight anywhere and mother in law wants to take her for one entire week across the country, alone. I suggested that my husband and I both go that way our daughter is comfortable and for gods sake in the event she dies? She can’t be gone for a week. Her nurses are here. Her care is here.”

“I suggested what if we all go for a shorter amount of time. I came up with various suggestions to which all were turned down. I should add that if my daughter was not in hospice I still would not be comfortable with our toddler being across the country for a week alone without her parents. My child being in hospice adds another layer of complexity to the situation.”

“I’m already grieving. My husband said we should acquiesce to his mothers trip to avoid drama (even though he agrees that our daughter is too young). But I want to spend time with her before the cancer takes her, she’s too little etc. I said no for various reasons not just to say no.”

“NTA. Nope. Just no. She wants to take your terminally ill daughter across the country for 7 days? And your husband would rather go along with it than tell his mommy no? Has everyone in your life lost their damned minds?!? Absolutely not. Your daughter isn’t going anywhere without you. Period,” said

“I would never be able to forgive myself if something happened to my daughter while she was gone if I were in that situation. OP your husband is being ridiculous by even suggesting that you just go along with this. This is YOUR child and no one should feel entitled to take her for that amount of time when she is already on hospice. Your MIL in insane,” said

“They’ve all gone insane. Hard NTA. Taking your toddler daughter away from her parents and comfortable familiar environment while she is literally dying would be downright cruel. I wouldn’t let my perfectly healthy toddler go on an across the country trip in which I wasn’t invited either, and that she’s so adamant about the parents not coming makes me question her motives on the trip. Is she trying to take your daughter to some kind of treatment clinic without your consent possibly?” asked

“NTA. Your husband is though. ‘My husband said we should acquiesce to his mothers trip to avoid drama.’ Under no circumstances do you do this. Remind your husband that if she does start drama, she will be using your dying daughter to do so. I can’t think of a more vile and selfish way to act towards a family that is suffering a tragic loss. “Suggested she would fight for rights before my daughter dies.” This is a guaranteed way to destroy an entire family, extended relatives and all. People will take sides on this depending on how much or how little of the truth they know. And people will disagree. Strongly. And this will last for years. Take her at her word though. Start collecting evidence. Document the things she does against your wishes and especially against the advice from the medical staff. Document the threats. Document the attempted travel without parental permission. Screenshot text messages. Save voicemails. All of it. I’m sorry you’re having to deal with this and I’m sorry that your MIL is compounding things,” advised

“DO NOT FLY!!! Your daughter has a tumor on her optic nerve, depending on size and location could be extremely painful or even fatal to her. Talk to her doctor to clear her for any extended travel, especially flights.. Spend time with your daughter, go to build a bear and get one of the bears that lets you do a voice recording (keep it away from hubby and his family). Take some of your daughters old clothes and have her help you make a quilt together. Don’t just make a memory, make something you will be able to anchor yourself with,” suggested

The OP added some new information in response, saying that she’s pretty sure that she will be divorcing her husband in the future:

“I wanted to add a few things. My mother in law lives in the same county as us. In the same city as my parents. It’s only about a 20 minute drive without traffic. However, my in laws have always been very adamant that we visit them. So I usually take my daughter over every other week for a few hours for a visit. Rarely do they ever come to our home. My parents like to visit and always have. My daughter is much closer to my parents for this reason. Anytime my husband and I go to date nights my parents come over and watch her because they like for her to be in her comfort zone. This is before the cancer. Since the cancer diagnosis we’ve been in and out of the hospital for weeks at a time. My parents have still been very much involved with helping but I’m the form of dropping off meals, helping with laundry, etc. I’m very close to my family and my family has been very respectful of us needing space as a family during this time. I think my in laws may be expediting guilt because they haven’t made much of an effort yo visit us, see us, or accommodate us. It’s always about what I, their daughter in law can do for them. Have always felt like an incubator who’s just there to facilitate a relationship between them and my child.”

“Him and I had a discussion this morning while our daughter was still asleep. I told him that I currently do not foresee myself staying married to him once my daughter is gone. Not after this. Not if he doesn’t stand up for his daughter, his wife, and our family. He looked pretty shocked. But I’m pretty set on not having anything to do with his family and him included. I thought him and I were a team, but he’s been spineless with his mom most of our marriage and I’m usually the one who is setting boundaries. I think my daughter having cancer and being in hospice is what broke this camels back.”