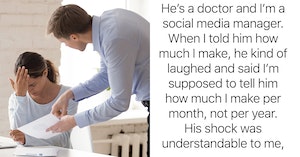 A recent entry in the popular Reddit forum “Am I The A–hole” has people somewhat divided on how a young couple should divide up the mortgage payments after one of them found out that the other is making significantly more money in their job. The entry was posted by a 22-year-old woman whose unusual working situation has her making over twice as much as her boyfriend, a doctor, as a social media manager. She says that her client is located in a nation where their currency is valued much higher than the currency in the country where they’re living.

As a result, she says she makes 150 percent of her boyfriend’s salary. He was understandably surprised, but his reaction caused controversy in their relationship, and subsequently on Reddit.

According to the poster, the subject of their finances came up when they decided to move in together after being in a relationship for a year and a half. He had recently purchased a house while she was living in a small apartment. When he found out about her income, he insisted that she therefore pay half of the mortgage on his house even though her name is not on it. This did not go over well.

“Once the initial shock wore off, he said that’s great, because now I can pay half of his mortgage,” she wrote. “I was a little taken aback by that. I mean, it’s not like I wasn’t going to contribute to the household at all. I would’ve been happy to buy groceries, pay utilities and cook and clean because my workload is MUCH lighter than his. I told him this and that I wouldn’t pay half his mortgage.”

While some commenters agreed with her boyfriend that she should pay half the mortgage if she’s going to be living in his house, comparing it to paying rent, others explained that a mortgage is different from rent because every payment builds equity. Or, as the OP explains, “if we break up, he gets a house and I’m left with nothing.”

The young woman even offered to compromise by pretty much completely furnishing his place.

“I offered up a compromise. His house is sparsely decorated to say the least. He has 2x 1 seat couches, a table that’s too big and a tv that’s too small. Oh, and a bed. He’s never really there, so I get it. I told him that I would furnish the entire house and get the groceries, cook and clean, and we’d go half on utilities. But he still insisted that I pay half of the mortgage.”

Her boyfriend argued back that paying half the mortgage is the same as her paying rent on her current apartment, but she explained in an edit that half the mortgage payment equals three times her full rent payment. Regardless, for her it’s the principle of the matter and not about the money.

It’s a bit of a tricky issue due to the complex nature of mortgages in the U.S. and other costs relating to home ownership. This has resulted in fierce debate in the comments, with people alternately accusing both partners in this case of acting entitled to the other’s money and assets, though the post has officially been labeled “NTA.” Some have even suggested that they don’t move in together if this is going to become a problem, and should consider instead getting a new place with a joint mortgage or rental agreement.