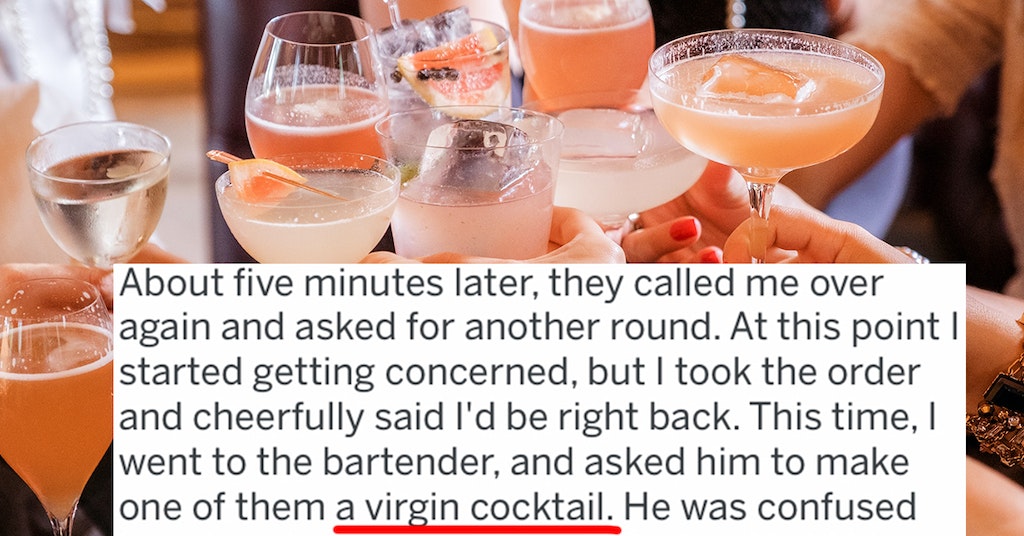 
If you’ve ever wondered if you’re an ahole, there is a place on the Internet where you can get a lot of opinions. The subreddit r/AmItheAsshole is a place where users tell their stories and submit themselves to judgment. The posts are then labeled: you are or you’re not.

Because of the subreddit's popularity, there are a lot of guidelines for how people are judged. If it seems like you're telling a story where you're obviously not an ahole, you'll be dismissed for wanting validation. And if you tell a story where you clearly are the a**hole, you'll get dragged to oblivion in the comments.

This story from user u/YouGottaStopThat is extremely controversial. The OP really thinks they did the right thing, but most of the commenters don't. Their story is that they were serving a group of women drinks when they overheard one of them making a comment that led them to believe she was pregnant:

The OP figured one drink wasn't a big deal, but when the group ordered a second round, they became concerned. They asked the bartender to secretly switch out the woman's drink with a virgin cocktail, removing the alcohol.

It didn't seem like she noticed, so the OP decided all's well that ends well. Until they had to drop the bill.

The manager had good cause to shriek. There are laws against discrimination that could get the restaurant in big trouble. However, OP is convinced they did the right thing, because they say they didn't want to feel responsible for fetal alcohol syndrome.

I'd like to point out here that at no point in this story does the OP mention that the woman confirmed she was pregnant.

FAS is a pretty serious condition and drinking while pregnant can be very dangerous. For this reason, OP's parents took their side.

The commenters still had no mercy. According to most of them, messing with someone's food is always a huge no and the OP was willing to steal from her too! Virgin cocktails are not the same price as alcoholic ones (which is the least of the issues here, but c'mon).

Some users pointed out that if the OP really has the strength of their convictions, they would have addressed it directly with the customer—which would have still been wildly inappropriate, because its none of their damn business! But at least they would have faced the consequences out in the open.

Also, they have no idea what's actually going on here. It could be a much darker situation than they realize.

Too many people think they have a right to dictate how women live their lives, especially if they suspect a fetus might be involved. If you want to control women's bodies, maybe you should be in the government, not waiting tables? Lots of a**holes there!