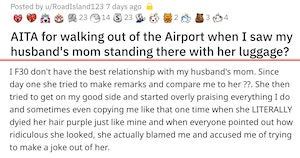 A woman’s upsetting story of attempting to take a vacation with her husband — and having it interrupted by his mother — is making waves after she shared it on Reddit.

u/RoadIsland123 told readers she had been saving up for a special two-week-long vacation to take with her husband when his mother asked if she could come along too. As it was meant to be bonding time for the couple — and the Redditor was the one who paid for the trip — she said no.

“[His mother] called, texted, sent people to talk [me] into letting her come, even threatened to call the police and make some complaint up to get us to stay if she can’t come,” she wrote. “My husband said we should just take her.”

Her husband tried to give an ultimatum, claiming he wouldn’t go on the trip if his mother couldn’t join, but when his wife stood her ground, he relented.

Or so she thought.

The day they went to the airport, the original poster was shocked and horrified to find her mother-in-law waiting for them at the airport with her luggage. It quickly became clear that her husband had been in on this selfish attempt to back his wife into a corner, and rather than going along with it, the Redditor opted to simply go home.

“He tried to say I was overreacting and that his mom was there ‘anyway’ and I should let it go and not mess the trip up for us. I told him he and his mom could still go and that I was going home,” she explained.

What’s possibly worse is that when her husband ultimately followed her home rather than going on the trip, he still didn’t seem to understand what he did wrong, insisting that she had overreacted.

Redditors strongly disagreed and were appalled at both mother and son’s childish and manipulative behavior.

While Redditors helped the OP see that the blame for this colossal catastrophe belongs squarely on the shoulders of her husband and his mother, unfortunately, he hasn’t been able to see it that way.

After trying to talk things out, she says he continued trying to blame her for the missed vacation so she decided to take her dog and leave.

“In that moment and seeing how he was still not even anywhere near understanding what he has done just…made things perfectly clear to me,” she wrote. “I just had pictured years and years of my life being lived like that and I was like no…I can’t do it.”

The ball is in the husband’s court now, and he can either sort his own personal drama out or continuing playing the victim. But the OP definitely won’t be going on any forced relationships with his over-involved mother either way.