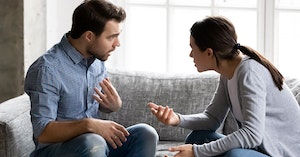 A man took to Reddit after he and his wife had an argument about their family finances, which are complicated due to both having children from previous marriages.

He starts off the AITA post with a bit of backstory: he and his wife Stella have been married for seven years, and they each have two children from previous marriages as well as a two-year-old son, Lucas, together. Custody for each set of siblings is complicated, and the couple made the decision to split their finances, “aside from a joint account for essentials (bills, groceries, house etc).”

He goes on to explain their job situations, saying, “We both used to be high earners, though had terrible hours. When our parental leave for Lucas was finishing, our children BEGGED us not to go back to work, that they hated the before/afterschool care and wanted us. In the end, my wife went back but I quit and got a new job.”

He took a pay cut to be able to spend more time with all of their children, while Stella took on more of their joint expenses since she kept her high-paying job.

Things became tricky when it came to school finances. His stepdaughter Brianna attends a private high school, and his own daughter Kira he says would love to go to school with her sister, but he “realised that on my current pay I won’t be able to afford to send her with her sister. My ex is barely willing to pay the costs related to public school, let alone a private one.”

He added that the private school is much better than the public one.

He tried to talk to his wife about helping to pay for Kira’s schooling—and she blew up at him for asking.

“It’s education, and she’s close with my daughters, so it’s not like I’m asking her to pay for something crazy,” he said in the post. “Stella refused. And I would have accepted it, even though I was annoyed.”

But then Stella threw his caring for their children in his face, saying “I ‘made my choice’ when I took the lower pay job. That I got more time for less money, so I can’t complain that I’m paid less.”

OP was understandably upset, because he had taken the lower-paying job so that he could be there for all of their children, Stella’s included.

“I got angry with that and told her that she knew the consequences of her job, so she can deal with her children then. Her money won’t be used on mine, so I won’t use my extra time on hers, they can stay in care until our old hours. Stella got pissed back, accusing me of using her for money and calling me a complete asshole for suggesting what I did for my stepchildren.”

The people of Reddit had a lot to say about the matter and informed the man that Everyone Sucks Here.