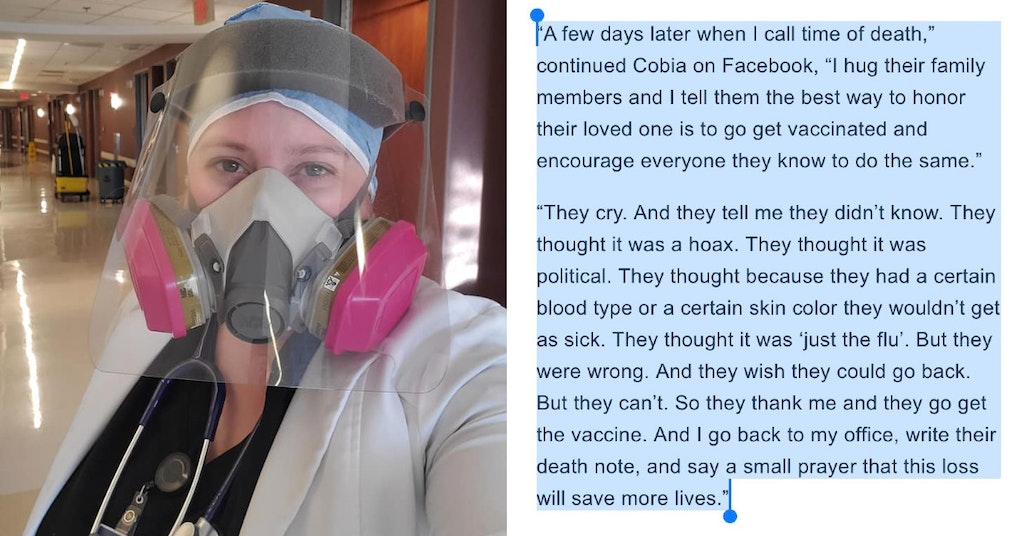 An Alabama doctor’s Facebook post on her experience with unvaccinated patients dying from COVID-19 is going viral for its honest account of how many of them are COVID-deniers to some level, but when it’s time for them to be intubated, they finally understand their mistake. Unfortunately, by that time, it’s usually too late.

All Dr. Brytney Cobia can do is try to turn a tragedy into a teachable moment for the families, some of whom admit they believed Trumpian talking points about the illness before going off to get vaccinated.

“I’m admitting young healthy people to the hospital with very serious COVID infections,” she wrote. “One of the last things they do before they’re intubated is beg me for the vaccine. I hold their hand and tell them that I’m sorry, but it’s too late.”

Alabama is currently one of the states with the lowest rates of vaccination against COVID-19 at just 33.7 percent, far below the national average of 49 percent. As a deeply red state, many are likely refusing the vaccine thanks to Republican politicians and pundits sowing doubt about their safety as well as the seriousness of the illness they’re designed to prevent. Cobia’s account of her patients and their families only confirms this.

All she can do is encourage survivors to do the right thing.

“And they wish they could go back. But they can’t. So they thank me and they go get the vaccine. And I go back to my office, write their death note, and say a small prayer that this loss will save more lives.”

Her post came in response to one by another Alabama physician, Dr. David B. Wilhelm, as he warned his followers about the highly contagious and dangerous nature of the coronavirus strain known as the Delta variant.

He quoted Dr. Scott Gottlieb as he predicted on CBS that most people who were not vaccinated would contract this version of the virus in the next two to three months, as well as others warning that the Delta variant is affected more young people, including children.

Speaking to AL.com, Cobia also shared what it’s like to treat people with a virus they contracted out of recklessness, expressing a desire not to feel bad for them but failing every time.

“You kind of go into it thinking, ‘Okay, I’m not going to feel bad for this person, because they make their own choice,’” she said. “But then you actually see them, you see them face to face, and it really changes your whole perspective, because they’re still just a person that thinks that they made the best decision that they could with the information that they have, and all the misinformation that’s out there.”

Many Republicans, especially Trump allies, have continued to push the narrative that the pandemic has been as bad as doctors across the world have begged people to believe it is and that the vaccine is not to be trusted. Vaccination rates have slowed significantly from earlier in the year in spite of half of the eligible population still lacking a single dose, confirming many fears that herd immunity will remain out of reach and we will simply have to deal with the new variants that continue to arise.

Some are having a hard time finding the same level of sympathy that Cobia has for those who bought into the lies.