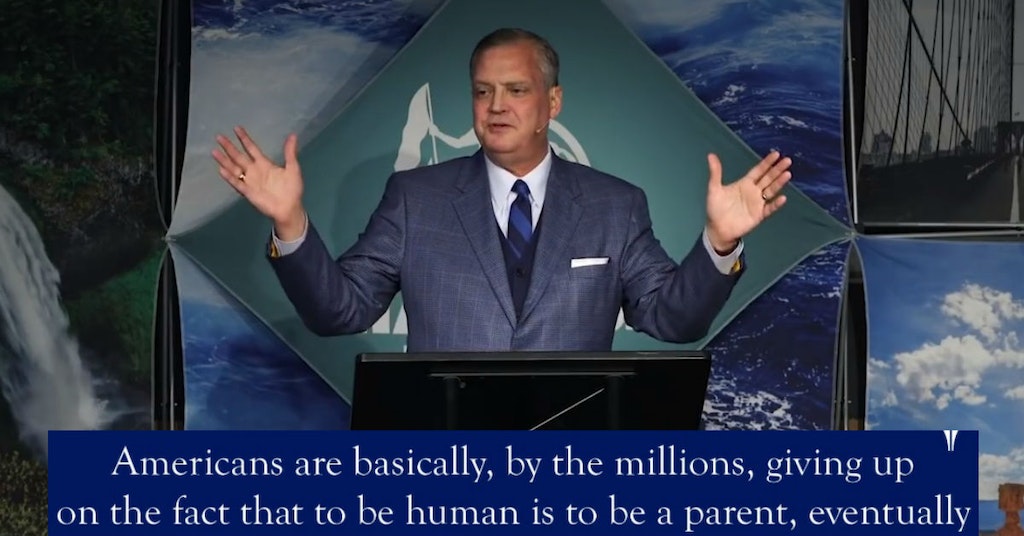 The president of the Southern Baptist Theological Seminary, Albert Mohler, responded to the recent Wall Street Journal survey that showed younger generations are not as interested in having kids and religions by writing a blog post arguing that having children is what makes you human.

Much of the extended blog post essentially argues that people should have children because God wants them to, which doesn’t work well for generations that are as disinterested in what any god thinks as they are in having kids. He also argues that the current economy is no excuse not to pop out babies since people still had kids during the Great Depression, forgetting that what they didn’t have was the birth control pill and other modern forms of contraception.

He then engages in a bit of fearmongering about declining birth rates, which, for the record, has only dropped below the death rate for white people. And the people who are worried about this tend to be white supremacists.

Back to the idea that you’re not human until you procreate, Twitter users have been giving Mohler a Bible lesson, reminding him of certain Biblical figures such as, say, Jesus Christ.

I love much of what you say, but I think a 33-year-old single, childless man from Nazareth might take exception to this.

1) Paul extolled remaining single as optimal for serving God
2) Some people are incapable of having children & you’ve just injured them more deeply
3) Your position is neither biblical nor sensical. Its only apparent purpose seems to be to support an abiblical cultural agenda.

Blessed be the ratio pic.twitter.com/0PM9nZa0lu

Others are wondering how human they get to be if they’re incapable of having children.

I am 49, unmarried and if I do get married in years to come, my future wife will likely be too old to have children. Would we be obliged to adopt in order to be human?

I see how it would deeply offend those who chose singleness, or those who cannot bear children. They should not be made to feel subhuman, irreligious, or marginalized.

Apparently you’ve never met anyone struggling with infertility. Or someone who has been abused and can’t trust anyone enough to get married. I would say I can’t believe the tone deafness of this statement, but it probably falls right in line with the patriarchy of the SBC.

Also, the racism and homophobia.

Come right out and say it so people understand: the reason US is becoming more diverse – brown and other faith – is because white Christian Americans aren’t having enough babies. Didn’t know your racism was so overt.

This is legitimately terrible theology, and not at all pastoral. It’s also borederine racist and definitely homophobic.

I read the whole thing just to be sure. You’re preaching the same breeding and nationalism doctrine the Nazis did. I know you’re not ignorant of history so this must be willful sin on your part. I’ll pray for your repentance and for those you mislead.

Someone needs Jesus, and it’s not Millennials.