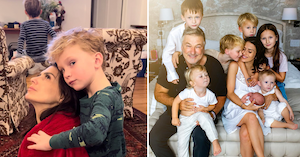 It’s fun to give cute and sassy captions to pictures of our family — especially the kids. After all, kids are always doing hilarious things. But Alec Baldwin captioned a photo of his wife, Hilaria Baldwin, getting a hug or a back rub from their 6-year-old son Leo — and fans did not think it was funny.

The original caption, which was called “sexually suggestive” by followers on social media, read: “The old ‘let me give you a back rub’ ploy.”

Baldwin later adjusted the caption to read, “Potato chips to follow” after followers voiced their disgust with the caption that they felt sexualized his child.

“That’s a pretty f**king weird comment to make on a photo of your son and his mother,” wrote one user.

“SexuaIizing children is always so weird but your own child? Yikes,” added another.

Others thought these outraged fans were making something out of nothing:

“The fact that anyone would find fault with this photo or caption is ridiculous. This photo speaks of healthy love and connection,” said one.

In the comments section, Baldwin explained that he “adjusted the text. I guess because…you know…there is so much of that Reddit trash out there.”

This is the first Instagram post Baldwin, 64, made after prosecutors announced plans to charge him with involuntary manslaughter after a fatal shooting on the set of “Rust” in which cinematographer Halyna Hutchins was killed in October 2021. Santa Fe District Attorney Mary Carmack-Altwies said in a statement that the film’s armorer, Hannah Gutierrez Reed, will also be charged with involuntary manslaughter. That sentence carries a maximum sentence of 18 months in jail.