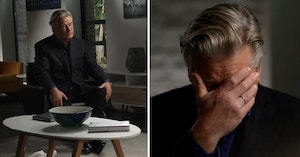 In a preview for an exclusive ABC interview with a highly emotional Alec Baldwin, the actor makes the previously unstated claim that though he was holding the gun when it went off, he did not at any point pull the trigger, stating that he would never do such a thing. Experts have suggested that the triggering of the gun, which was not supposed to contain live ammo but for some reason did, could have been accidental as it takes very little trigger movement on a handgun for it to fire.

The full interview, set to air on Thursday during prime time on ABC and Hulu, may contain more details as to what exactly could have set the gun off, but the preview showed Baldwin stating without a hint of doubt that he did not pull the trigger.

“Well, the trigger wasn’t pulled,” he said to a visibly surprised George Stephanopoulos. “I didn’t pull the trigger.”

The story that originally came out around the accident that killed cinematographer Halyna Hutchins and wounded a director was that Baldwin was going over a scene for the upcoming Western film Rust, pointed the gun to demonstrate what he was to do in the scene, and pulled the trigger. What he didn’t know was that somehow a live round, which is not supposed to even be allowed on a movie set, had made its way into the firearm, and the trigger released it into Hutchins’ chest.

Baldwin reportedly demanded why he was handed a “hot gun” on the set and appeared to be emotionally devastated after the accident. He repeatedly wipes away tears and visibly cries during the preview of the interview, and doesn’t hesitate for a second to confirm to Stephanopoulos that it was the worst thing to ever happen to him.

Some have accused Baldwin of negligence himself, saying that the Rust scene did not call for the trigger to be pulled, which, if true, could leave the actor vulnerable to liability as investigators build their case. TMZ highlighted Hollywood weapons expert Steve Wolf, who explained that his own students would never say that they “pulled” a trigger, suggesting that Baldwin might be trying to protect himself with semantics. He then demonstrates how easy it is for a handgun like the one used in Rust to go off.

“If in fact he says he didn’t pull the trigger, then he could have been one of my students, because I teach people you don’t pull triggers, you press the trigger,” says Wolf.

“What he’s saying is that he’s not aware of having intentionally decided to shoot the gun.”

Unionize staff from the set of Rust have placed the blame for the accident on producers who repeatedly failed to honor their contracts or follow set safety measures, saying that there had already been issues with “prop” guns during the filming of the movie. They even walked off the set the morning before the shooting to protest these conditions and were replaced by hastily hired non-union staff by producers who did not want to delay production.

The ABC interview will be Baldwin’s first since the death of Hutchins. Soon after the accident, he posted a statement to Twitter expressing his grief and willingness to cooperate with investigators.

“I’m fully cooperating with the police investigation to address how this tragedy occurred and I am in touch with her husband, offering my support to him and his family,” he said. “My heart is broken for her husband, their son, and all who knew and loved Halyna.”