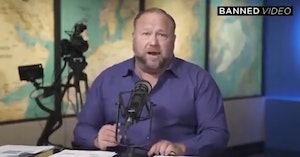 The infamous and very loud conspiracy theorist Alex Jones has officially lost all four of the defamation suits brought against him by the parents of the Sandy Hook school shooting victims by default after refusing to turn over his financial records as ordered by the courts. He had already been ruled liable by default for this exact reason in two similar lawsuits, but apparently learned nothing, so a Connecticut made a sweeping ruling that he would be owing money to all the Sandy Hook parents who sued him for pushing false claims that the massacre was a “false flag operation.”

This means that 10 families of the extremely young victims killed in the elementary school shooting will finally get some closure after enduring these wild claims about their dead children as well as harassment and threats over telling the truth in addition to a bunch of Jones’ money.

The families have alleged that Jones profited from the “false flag” conspiracy theory, which spread among gun rights extremists who believed the horrific shooting was staged by the government as a justification for restricting access to or confiscating firearms. In spite of the fact that, as usual, the federal government was unable to pass any kind of meaningful gun control legislation after the mass murder event, Jones repeated these absurd claims on his notorious InfoWars program.

Jones denied that he profited from this, but when ordered to turn over his financial records to prove this, he simply didn’t.

Hearings will now be held to decide exactly how much he will owe the families, including court-related fees, which he will also have to pay. Default rulings like this are rare, but judges presiding over his trials have cited Jones’ baffling and continuous refusal to comply with simple orders even after being repeatedly given more time to do so.

“The Court finds that Defendants’ failure to comply … is greatly aggravated by [their] consistent pattern of discovery abuse throughout similar cases pending before this Court,” wrote Judge Maya Guerra Gamble in her ruling on the first two defaulted cases. “The Court finds that Defendants’ discovery conduct in this case is the result of flagrant bad faith and callous disregard for the responsibilities of discovery under the rules.”

Although Jones has made plenty of money selling non-FDA-approved supplements and gold on InfoWars, losing six total defamation cases after already having to pay over $100,000 in court fees to not turn over the ordered documents could land him in serious financial jeopardy. The conspiracy peddler responded to this latest default ruling by complaining that he was being denied the right to the trial he was refusing to participate in with any shred of good faith.

“These individuals, again, are not allowing me to have a jury trial because they know the things they said I supposedly did, didn’t happen,” he claimed. “They know they don’t have a case for damages. And so the judge is saying you are guilty of damages, now a jury decides how guilty you are. It’s not guilty until proven guilty.”

According to the Associated Press, his lawyers have denied violating the rules by refusing to hand over the financial records as ordered, but no word on how they’re defending this bizarre claim.

While nothing can erase the unmitigated horror of not only losing a child in a mass shooting targeting children but getting death threats from people because some screaming potato man told them the child was an actor in an anti-gun scheme, Jones’ critics are pleased with the ruling, to say the least.