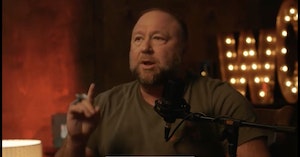 Conspiracy peddler and man facing financial ruin for harassing the parents of school shooting victims Alex Jones claimed Wednesday that his newly released book has sold more copies than any Harry Potter book in the two weeks since its release on August 30.

Jones did not present any evidence to support this bizarre claim during his interview with far-right political commentator Steven Crowder, but claimed that most of these alleged sales took place through his InfoWars website.

And, of course, he alleged a broad conspiracy to hide or suppress sales numbers of The Great Reset: And the War for the World and keep him off of the New York Times Best Sellers list.

“And it went to number one on a whole bunch of charts, went to number two on Wall Street Journal and a bunch of others. And then that’s even with some rigging. It should have been number one there,” he claimed to Crowder. “The New York Times talked to Tony Lyons, the head of Skyhorse publishing and said, ‘It’s Alex Jones. We’re not even gonna list it.’ So there were books that were like, number 19, 15, you name it on the New York Times Best Seller list that we sold 10, 15, 20 times more books than those.”

Considering the fact that you can’t say “Alex Jones” without thinking about people sending harassment and threats to the Sandy Hook parents, one could understand why any bestseller list wouldn’t want his name anywhere near them. However, as usual, there is no actual evidence that anything he’s saying is true. He can’t even seem to keep track of how long his own book has been for sale.

“Stuff way down their list, we sold dozens of times more,” he went on. “And that’s just in the first month of its sale at cash registers at stores. That’s how that happens. It doesn’t count all the massive amounts that got sold online at Amazon or InfoWars.com.”

“So it is the number one book, not just fiction, not just non-fiction — all of them. More than any textbook, more than any Harry Potter book.”

The new title, according to the official description, outlines “the global elite’s international conspiracy to enslave humanity and all life on the planet.”

The only sales numbers we could find for The Great Reset were from the Publishers Weekly bestseller list, which placed him at #11 overall for the first full week of September and said that it sold over 30,000 copies it its first week available for purchase. InfoWars sales would have to make up a massive proportion of the sales considering the fact that Harry Potter and the Sorcerer’s Stone has sold over 120 million copies worldwide as the fifth most popular book of all time.

The new Alex Jones title currently sits on spot seven on Amazon’s best seller list. It’s also important to note that wealthy pundits like Jones, as well as politicians, often buy up mass numbers of their own books through PACs or other money-hiding operations in order to artificially inflate their numbers and land on these lists. Although Jones is facing yet more devastating trials to determine how much money he owes Sandy Hook parents, he still has plenty of money right now.