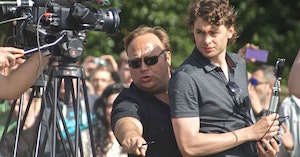 A tell-all feature was published in the New York Times by a former video for Alex Jones’ conspiracy theory website InfoWars today and it’s full of juicy, jaw-dropping details about the highly volatile host and his lie-filled empire. Jones has been frequently mocked by the left for making claims such as something about chemicals in the water making the frogs gay, but he also has a large following that is easily influenced by claims that they take as absolute truth.

The article by Josh Owens demonstrates just how dangerous this is.

At 23, Josh Owens quit film school to work as a video editor for Alex Jones. This is his account of the years he spent within the Infowars empire. https://t.co/VwDaoSGZ3l

“I dropped out of film school to edit video for the conspiracy theorist because I believed in his worldview,” the article subheader reads. “Then I saw what it did to people.”

Owens worked for Jones for nearly five years, from 2012 to 2017, nearly quitting several times but being pulled back in by sudden bonuses and raises.

“I hadn’t discussed my discontent with Jones, but he seemed to sense it,” Owens wrote.

The video editor finally got out by taking a 75 percent pay cut, refusing offers from Jones to double his salary. Owens thinks it’s about control, but it might have had more to do with him knowing too much.

The entire piece is well worth a read, but here are the craziest highlights:

1. Jones drunk-drove to the polls.

“As Jones punched the gas pedal to the floor, the smell of vodka, like paint thinner, wafted up from the white Dixie cup anchored in the console.”

After being denied entry because video recording at polling locations is illegal, he kept drinking until he started slurring his words, then drove home.

2. He fabricated a radiation story to tell his supplements.

“We started getting calls from the radio-show producers in the office, warning us to stop posting videos to YouTube stating we weren’t finding elevated levels of radiation.”

“Stories abounded among my co-workers: The blinds stuck, so he ripped them off the wall. A water cooler had mold in it, so he grabbed a large knife, stabbed the plastic base wildly and smashed it on the ground.”

you should really read this wild essay from a young former Infowars staffer who left and has a lot of regrets https://t.co/jmz0BY2rJc pic.twitter.com/fJ63NA2lBY

4. Banning laughter in the office.

“On one occasion, he threatened to send out a memo banning laughter in the office. ‘We’re in a war,’ he said, and he wanted people to act accordingly.”

“When he came hours later, after eating a few handfuls of jalapeño chips, he picked up an AR-15 and accidentally fired it in my direction…The bullet hit the ground about 10 feet away from me.”

6. Emptying handgun clips into a bison.

“Then the camera panned over to Jones, maybe 20 yards away, holding what looked like a handgun. Jones began firing at the bison, tufts of hair flying with every hit. The animal remained standing as Jones shot round after round.”

“Late one night, after an extended live broadcast, Jones walked into my office shirtless. This was normal; he removed his shirt frequently around us.”

“‘Hit me,’ he said to an employee in the room. When the employee refused, Jones got louder, his face redder. ‘Hit me!’ He kept saying it, getting closer each time…They traded a few more punches, each time seeming less playful. Jones became wild-eyed, spit flying from his clenched teeth as he exhaled.”

9. …And breaking their ribs.

“A few weeks later, I heard that Jones had broken a video editor’s ribs after playing the same game in a downtown bar.”

“Jones told us to file a story that accused the police of harassment, lending credence to the theory that this community contained dangerous, potential terrorists. I knew this wasn’t the case according to the information we had. We all did.”

“The information did not meet our expectations, so we made it up, preying on the vulnerable and feeding the prejudices and fears of Jones’s audience.”

Though told in interviews that the people of Islamberg were “kind, generous neighbors,” Owens writes that InfoWars decided to lie. “The information did not meet our expectations, so we made it up, preying on the vulnerable and feeding the prejudices and fears of Jones’s audience. “We ignored certain facts, fabricated others and took situations out of context to fit our narrative.”

12. Jones admitting he doesn’t want to do any of it anymore.