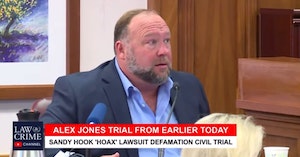 The case against Alex Jones took a truly unexpected turn in court on Wednesday.

The Infowars host is in the middle of a defamation damages trial after spreading false conspiracy theories that the Sandy Hook Elementary School shooting in 2012 was staged and “a giant hoax,” and accused parents of the murdered children of being crisis actors. In turn, he was sued by a number of the families and found liable by a judge, with a jury set to deliberate how much he will have to pay in damages.

During the trial, not only has Jones been forced to admit that he does believe the shooting was “100% real,” but an alleged mistake by his lawyers resulted in two years’ worth of his text messages being delivered to the attorneys representing the Sandy Hook parents.

Jones apparently learned this in court at the same time as everyone watching from home, as attorney Mark Bankston revealed the info and added, “And that is how I know you lied to me when you said you didn’t have text messages about Sandy Hook.”

Bankston further said that he informed Jones’s lawyers of the mistake, and they did not respond by identifying any of the information as privileged, meaning it “fell free and clear into [Bankston’s] possession” after a set time of inaction.

People online were flabbergasted at the unexpected turn of events, which ultimately portrayed both Jones and his lawyers as completely incompetent, the former for allegedly trying to get away with lying about his texts and the latter for “accidentally” giving them to the opposing counsel.

It completely lit the internet up, and we’ve compiled some of the best responses to read while you try to process the absurdity of it all.