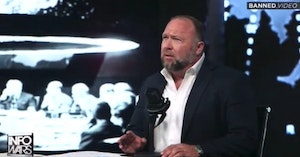 Alex Jones predictably discussed his current legal nightmare on an episode of InfoWars, trashing his lawyers for screwing up to the point of somehow sending a treasure trove of his text messages to the prosecution.

Not only has this opened him up to multiple additional lawsuits as everyone from his ex-wife to the January 6 committee subpoenas those texts, they allegedly contain evidence that Jones committed perjury.

Some people would have canceled the show at that point, since any money he makes from it could end up going directly into the pockets of the Sandy Hook parents suing him, but the man just can’t stay off the camera or keep his mouth shut.

In a clip from Jones’ most recent show posted to Twitter, the walking disaster plays the part of the trial where the opposing lawyer tells him that he can invoke his 5th Amendment rights and almost immediately goes after his own attorneys.

But he claims he’s not attacking them, “it’s just a fact” that they should have jumped up and demanded that the “deposition” be shown in court. Instead, as you likely well remember from the amazing courtroom footage, his head lawyer sat there frozen like he hoped the court was a T-Rex that couldn’t see him if he didn’t move.

Jones went on to spout his usual babble with some legal keywords thrown in before claiming that he totally searched one of his phones, found nothing, then just tossed his other phones to his attorneys and told them to do whatever.

He then continued to push the (clearly false) narrative that he doesn’t “care” about Sandy Hook.

Who is the “they” forcing Alex Jones to talk about things he doesn’t care about (murdered children) on the show that he owns and has full control over? (Gay frogs, maybe?)

“And it’s just so incredibly sick that I sit there and give the damn lawyers all the text messages and then they send it over to Connecticut. The Texas lawyers, before the new one I have never even gave them the stuff I gave them! Or that’s what they claim.”

Jones then seems to try and claim that his lawyers intentionally and voluntarily handed over the text messages to the opposing legal team, which is based in Connecticut, but it’s hard to follow his erratic speech patterns.

The far-right conspiracy theorist appears to finally be getting what’s coming to him after years of harassing the surviving families of the horrific Sandy Hook school shooting and bizarrely claiming it was all a “false flag” operation to attack gun rights. Meanwhile his lawyers seem to be in full desperation mode, asking for a last-minute mistrial based on their monumental mistake. (They were denied.)

According to one of the lawyers representing the Sandy Hook parents, both federal law enforcement and the House January 6 committee have already asked him for the texts they received from Jones’ lawyers, and he’s prepared to comply “unless he’s ordered otherwise.” There have been early reports that the texts contain some very interesting messages with Roger Stone, which should be fun for the committee to go over.

Jones claimed on the stand that a penalty of over $2 million would “sink” him and InfoWars, so many people are praying that it’s a lot more than that. The glee over his demise may finally be the thing that unites the left.