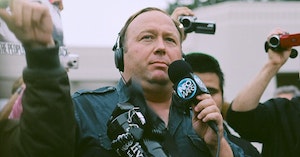 Alex Jones, long-time Infowars host and conspiracy theory monger, had been issued a rare double loss in two of several lawsuits filed against him for damages caused by his continued pushing of the idea that the Sandy Hook Elementary School shoot was a false flag operation.

Judge Maya Guerra Gamble issued default judgments against Jones, meaning that he has been found liable for all damages, due to his repeated failure to provide requested documents or generally stop openly defying court orders in spite of multiple sanctions against him.

After three years, Gamble finally reached the end of her patience.

A jury will now be set up to determine how much Jones will have to pay to two surviving Sandy Hook families. He has already had to pay $100,000 in legal fees for failing to hand over documents in a timely manner for one of the nine lawsuits against him on the subject.

These nine families have said that they have endured continued harassment from Infowars fans accusing them and their late children of being “crisis actors” in a government false flag operation designed to drum up support for gun control. This is in spite of the fact that no meaningful gun control legislation has been passed on a federal level in spite of near-daily mass shootings occurring in the U.S., some with massive death tolls.

Jones has powered through seven lawyers in the past three years while fighting these lawsuits, with his latest of course acting like the rulings by Gamble are completely unreasonable. The default rulings are exceedingly rare in the state of Texas, with legal experts referring to it as nearly mythical and as a “death penalty sanction,” but the plaintiff’s lawyers say they are not surprised at Gamble’s decision considering Jones’ behavior.

“It is extremely rare that a party (Alex Jones and Infowars) is ordered by the Court to comply with discovery, is sanctioned for failing to obey with the Court’s multiple Order(s), and then continues to blatantly disregard the Court’s authority by continuously refusing to comply,” wrote attorney Bill Ogden to HuffPost.

Jones has claimed that he no longer believes in the false flag conspiracy theory and blamed “the government” for inflicting him with “psychosis,” which made him question every bit of reality. This does not explain why he repeatedly refused to comply with court orders, nor is it comforting to the parents who continue to receive explicit death threats from people who believed his lies.

It remains to be seen just how financially devastating this will be for Jones, but his critics are clearly hoping for something in the range of “utterly.”