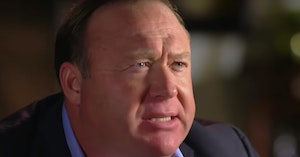 The Sandy Hook shooting was one of the darkest moments in our recent history. In 2012, a mass shooting happened at Sandy Hook Elementary School, killing 20 children and six school employees.

In retrospect Sandy Hook marked the end of the US gun control debate. Once America decided killing children was bearable, it was over.

Making things even worse was Alex Jones, who owns the far-right conspiracy website, Infowars. Jones was one of many people pushing conspiracies about the mass shooting, saying it was an attack by the United States government. It didn’t stop then. Nearly two years after the tragedy, Jones added to that conspiracy theory, claiming the children were all “crisis actors.”

Alex Jones saying that the Sandy Hook victims were child actors isn't an "unsubstantiated rumor." It's a sick, twisted lie. It's your choice to keep him on Twitter but don't pretend his maniacal conspiratorial ravings are normal.https://t.co/bd6SDu51sK

After years of defaming the victims’ families, Neil Heslin sued Jones for defamation. Heslin is the father of a six-year-old boy who was killed in the massacre. Heslin is not the only parent who has sued Jones. In another one of his conspiracy theories, Jones accused Sandy Hook father Leonard Pozner of being a crisis actor. The conspiracy theory affected Pozner so badly that he had to move multiple times over threats from Alex Jones fans.

On Dec. 20, a Texas judge ordered Jones to pay $100,000 in legal fees, saying Jones and his lawyer failed to produce witnesses to the plaintiff and that they should be treated as contempt of court.

A Texas judge has ordered Alex Jones and his InfoWars hoax website to pay more than $100,000 in court costs and legal fees, marking the latest court victory for a Sandy Hook family suing Jones for his promotion of conspiracy theories about the shooting. https://t.co/NntKulGvC2

“Mr. Jones is learning that he cannot treat the courts with the same contempt he showed my clients,” Mark Bankston, who is Heslin’s lawyer, said in an email. “In disobeying court orders, Mr. Jones has shown how desperate he is to ensure nobody finds out how Infowars really operates, or the lengths the company went to carry out its five-year campaign of malicious harassment against these parents.”

Naturally, people were glad Jones got what he deserved.

Seems Karma is still in business.

A Texas judge has officially ruled that InfoWars’ Alex Jones must pay over $100,000 in legal fees and court costs in a defamation case that a parent of a slain Sandy Hook child brought against him.

I hope Sandy Hook families keep suing him until he’s penniless. I really do.

I hope the Sandy Hook families take every last dime out of this cretin’s pocket. https://t.co/G4BYWSpC8O

Some pointed out, however, the amount awarded to the family doesn’t compare to the damage he caused.

It's not enough. Alex Jones is a demon. He put those families through Hell. https://t.co/RfVUEdu8b3

The payment is too small. Ten million would have maybe sufficed. And Jones will got on spouting his murderous garbage while claiming that he is actually repentant, that he acted on a delusion. The poor mental case. Yeah, right. https://t.co/XOiy827sHH via @GoogleNews

And while no amount of money will quell the pain these families face every day, it’s good to see a person face consequences for their actions.