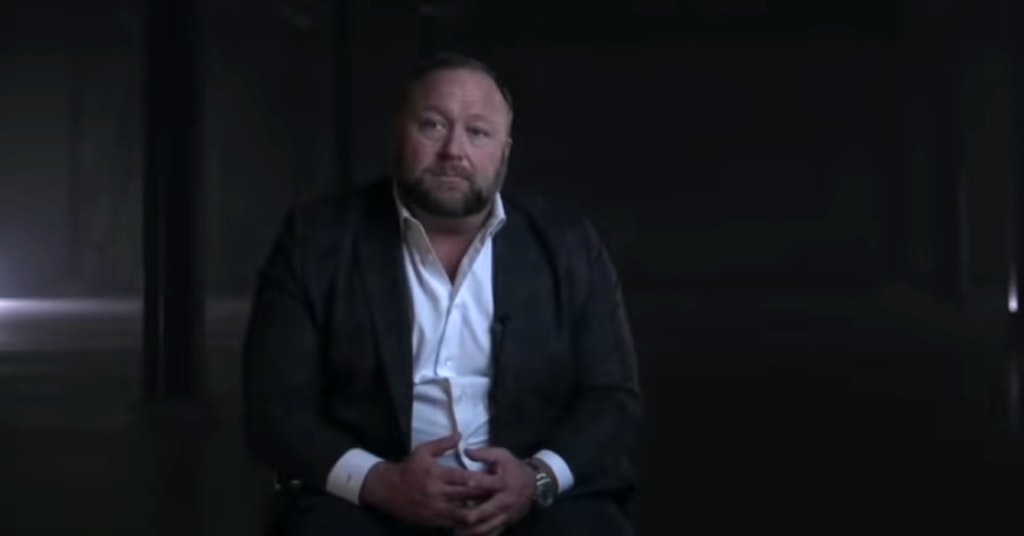 Whether conservative provocateurs actually believe the swill they’re peddling to the masses or if they’re just trading outrage for profit has long been a topic of conversation, despite the end result being the same either way.

But for Alex Jones, the truth may be coming out.

A 2019 recording of the InfoWars host ranting about how “sick of f—king Donald Trump” he is was leaked to the Southern Poverty Law Center by Caolan Robertson, who was shooting Jones’ “You Can’t Watch This” at the time.

The footage was omitted from the documentary by request of Jones, something Robertson proved through text messages provided to SPLC.

Sure enough, Jones has capitalized on Trump’s base for years, promoting his conspiracy theories and pushing whatever other pro-Trump rhetoric will keep the ex-president’s rabid fanbase lining his pockets.

But it would seem that’s all a charade.

“It’s the truth. I’m just going to say it, that I wish I never would’ve f—king met Trump. I wish it never would have happened,” Jones said in between interview takes. “And it’s not that the attacks that I’ve been through. It’s that I’m so sick of f—king Donald Trump, man. God I’m f—king sick of him.”

The admission wasn’t necessarily surprising to those who have long argued that these conservative shock jocks are just in it for the money and notoriety.

Jones hasn’t commented on the video yet, but he may be busy with the FBI probe into how much his own comments served to incite the Capitol riot in January.

The video also doesn’t appear to have generated much backlash in the pro-Trump communities, despite those same people’s propensity to immediately turn on anyone whose loyalty to Trump comes into question. But in this case, Jones is still saying all the right words in public even if he loathes Trump in private, and that surface level may ultimately be all that matters to their overlapping fans.